Colin Hansen, your pants are smokin’ 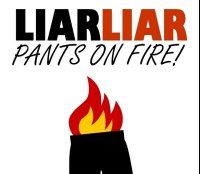 British Columbia’s Auditor General John Doyle says the Liberal government is not following generally accepted accounting principles (GAAP) and understated the 2010 deficit by $73 million. Finance Minister Colin Hansen downplayed the news and stated this was merely a simple disagreement over methods of accounting. He said that Mr. Doyle, having last worked in Australia, has inadequate understanding of Canadian ways of business. That is untrue and Hansen is fully aware he talked nonsense in claiming that John Doyle does not understand GAAP.

The government chooses to misreport disputed financial information because it does not want to admit the policies in play. Particularly, that, at the very time it was slashing public programs, it was gifting hundreds of millions of dollars to wealthy gas and oil producers and making deals in secret with favored contractors to build more than $4 billion of highway and bridge projects in the lower mainland.

Which side do we believe in this variance? Well, Colin, there ain’t no way to hide your lyin’ eyes. Your record of disrespect for truth is clear.

The position of Auditor General is designed to be worthy of trust; the position of Finance Minister is not. The A-G is selected by all political parties and does not answer to the Civil Service, Premier, Cabinet or any partisan authority. John Doyle is an officer of the legislature, responsible to work without partisanship. This independence is not shared by the Comptroller General who takes direction from senior government officials as recently demonstrated in the politically purposed attack on the Vancouver School Board.

In the absence of material difficulties, auditors ordinarily express an opinion that financial statements fairly present a financial postion according to generally accepted accounting principles consistently applied. Withholding of a “clean audit report” is carefully considered and extensively discussed with top officials of the enterprise under review. Except for cheaters, corporate accountants never face a reserved audit opinion. It is a near universal sign of dishonesty and intent to mislead.

Of course John Doyle, like every other designated professional accountant working in Canada understands GAAP. Even junior accountants on his staff are thoroughly conversant with current standards. For Hansen to state that Doyle lacks appropriate knowledge in this area is to accuse him of a serious professional failing. Similarly, he slanders Mr. Doyle’s colleagues who, incidentally, did not come from Australia:

Auditor General Doyle says the province’s deficit should be higher by $73 million and he says that taxpayer supported debt is understated by $544 million because the government is not accounting properly for the Transportation Investment Corporation.

He also warns that pending changes in accounting standards affect how BC Hydro operations are consolidated. The deficit for 2010 would increase $705 million under the proposed principles. Another shocking revelation in the Auditor General’s report is that BC Hydro has over $1.7 billion in expenses that have been incurred but will not be recognized in financial statement until some time in the future. Essentially, they are worthless assets, already consumed with zero liquidity. Some argue the amounts should be shown as an increase of the deficit.

Clearly the Liberal Fudge-it Budget is now more completely revealed. Will mainstream media pundits bother to report the information or will it be undisclosed like other Liberal malfeasance?