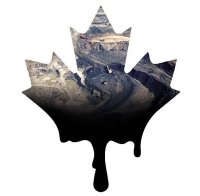 Propaganda is a tool favoured by leaders who suppose unthinking citizens can’t determine the common interest. Noam Chomsky says it is to a democracy what the bludgeon is to a totalitarian state.

The tar sands extraction industry and parasitical agents like Ethical Oil, along with Stephen Harper’s government, are investing heavily in a campaign of duplicity and exaggeration as they use the metaphorical bludgeon on Canadians. Public relations and political arrangements have always been a significant cost of doing business in dirty oil. Even before Syncrude, the first significant Athabasca tar sands operator, began producing bitumen in 1978, they were spending hugely on spin doctoring. My employer in the seventies was one of the beneficiaries.

In early days, as they do today, big city flacks talked much about economic development and harm-free bitumen production but not of carbon loads and mercury, arsenic, lead or other poisons that would destroy lives of permanent residents, mostly First Nations, in rural Alberta. Decades later, the energy subject illustrates what writer Stephen Hume once called a defective political culture through “deception by omission, misleading half-truths, disingenuous dissimulation and sleazy spin-doctoring.”

There is no better example than the Harper Government’s approach to energy regulation. The Toronto Star’s national affairs columnist wrote,

“It appears [Stephen Harper] is undermining the work of an independent panel that is hearing aboriginal and environmental objections to the $5.5 billion project that would run from Edmonton to the Pacific, from where Alberta’s oil could be shipped across to Asian markets.

“…he appears prepared to do whatever it takes to ensure a Keystone repeat will not be played out in Canada’s west.

“…As the regulatory process stands now, a denial of the project does not go to the federal cabinet for a final decision. But as Harper seeks a way to streamline the hearings process, those who know this file were suggesting he could also change the rules to allow cabinet to overturn a negative finding.

Before federal government regulatory hearings began, allegedly to objectively examine the pipeline project, Harper’s federal government had already declared unbounded support for the project, calling it an exercise in “nation building.” The Joint Review Panel for Enbridge Northern Gateway Project is part of the National Energy Board and the Minister responsible for it is Joe Oliver.

Oliver demonstrates not even a pretense of even-handedness, saying that his ministry’s review process is “broken.” His open letter, released the day before hearings began, claims environmentalists have a radical ideological agenda and aim to prevent trade and stop any major economic project in Canada. Of course, the potential for developing truly significant industrial expansion in Canada is lost when industry chooses to export barely processed bitumen. Multinational oil companies care little about refining in Canada to produce intermediate and end products of petroleum: liquid fuels, lubricants and petrochemicals such as fibres, plastics and pharmaceuticals.

In a truly ironical closing, Joe Oliver’s letter says “our fair, independent” regulatory system must “review the evidence dispassionately” and then make an objective determination based on science and the facts. Of course, Toronto based Joe Oliver, a Montreal native who spent his career in corporate securities, is already playing with loaded dice. He is responsible for the National Energy Board, which consists of:

These people are industry insiders with urban backgrounds. They were selected by political masters to further commercial objectives yet Canadians are told the NEB will conduct a “fair and independent” examination of a project that is essential for achievement of the goals that led China to invest billions in Alberta tar sands production. The Harper government gave tacit approval to that Chinese investment a few years ago and the resulting demand for Canadian dollars pushed the currency exchange rate upward to the detriment of Canadian exporters such as those in British Columbia’s forest industries.

Here is a further example of how the review process is fundamentally flawed. Sheila Leggett sits on the three person Joint Review Panel for Enbridge Northern Gateway. In 2008, she described the NEB to an international pipeline conference in Calgary:

“We are a Canadian Federal energy regulator. Our responsibilities include regulating:

“- The construction and operation of pipelines

“- Transportation, tolls and tariffs
“- International trade in oil, gas and electricity as well as some frontier Oil & Gas regulation.

The agency sees itself as a facilitator of pipeline construction and promoter of trade in international energy. Indeed those things are its raison d’etre and Ms. Leggett says the NEB’s aim is to promote the energy infrastructure.

“…designation of Sheila Leggett as Deputy Administrator of the Northern Pipeline Agency (NPA).

“…The NPA was established in 1978 to facilitate the construction of a pipeline by Foothills Pipe Lines Ltd., now owned by TransCanada Pipelines Ltd. The pipeline would carry natural gas from Prudhoe Bay, Alaska, and potentially Yukon and northern British Columbia to markets in Canada and the lower 48 states.”

Ms. Leggett’s assigned role is unambiguous. In this project, her duty is to “facilitate the construction of a pipeline.”

Ian Austen writing in the New York Times sees through the current propaganda efforts of one well financed industry shill:

“Foreigners and their foreign hired hands should butt out,” said Kathryn Marshall, a spokeswoman for Ethical Oil.

“While most Canadian environmental groups are charities and must disclose the major sources of their funds, Ethical Oil does not. Ms. Marshall said that the group accepted money from only Canadians and Canadian companies, although she declined to directly say if that included Canadian corporations controlled by foreign entities. Many of the large energy companies active in the oil sands are foreign-owned or -controlled.

“You can look up the definition of a Canadian company,” she said.”

In the Enbridge project, the National Energy Board will ultimately offer reassurances about diligent inspections and increased spill response capabilities but environmentalists are mistaken if they see the Joint Review Panel as anything more than window dressing for a project that will proceed. Since it provides certainty of higher oil prices to both domestic and foreign consumers, the multinational energy industry has called the tune. The obedient Harper Government has begun to dance.