J’accuse – BC Hydro, plaything of fraudsters

BC Liberals and their media surrogates regularly accuse BC’s NDP governments of responsibility for “skyrocketing spending and debt.” Not that it matters to Liberal supporters, but we can determine if the aspersion is based on fact.

Exhibit 1: Graphs of BC Hydro debt guaranteed by taxpayers, taken from Ministry of Finance debt summaries:

It seems that facts don’t support myth. Remember, this does not include commitments made by BC Hydro to purchase future energy from private power producers. That amounts to tens of billions of dollars – money that will be paid by consumers. 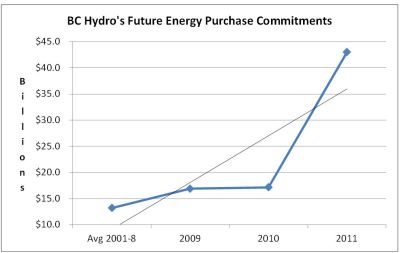 Consider if these numbers demonstrate a change in purpose behind BC Liberal policy. When they first formed government in 2001, I believe they had the well motivated objective of modernizing government and having it operate efficiently.

For example, BC Liberals claimed that NDP failure to create a business plan before starting the fast-ferry program was proof of inept management. They said that future program spending would be subject to careful consideration and effective controls. (In 2012, Liberals refuse to release any business plan that relates to the planned disposition of LDB assets.)

However, at some point, greed and arrogance became the driving forces behind Liberal policy. The enrichment of insiders became paramount and the favourite target was BC Hydro. In 2010, with Gordon Campbell losing his grip on power, the restraints came off.

Read more on BC Hydro by clicking here and scrolling through many Northern Insight articles.