Behave like an owner: Alberta’s oil and gas resources belong to Albertans. The Tories’ “strip it and ship it” approach was not only wasteful, but also environmentally destructive…

The Tories consistently avoided transparency on bitumen revenues, and the impact of volatile prices or mining of unconventional resources on royalties. They gutted their own expertise on the subject under Ralph Klein and became highly dependent on industry numbers and analysis. This move has been disastrous for the province…

But the path for reforming a petrostate is clear: [Notley] must restore accountability, rebuild public institutions, and reintroduce a representative taxation system. She must embrace more economic openness, and invest in human resources and greater transparency. Last but not least, Notley must also address the province’s glaring environmental deficits and pathetic record on climate change.

Nikiforuk’s analysis is worthwhile but wrong in one important element. The Alberta government does not run on resource revenue and that fact is demonstrated by a graphic from the recent Budget 2015: 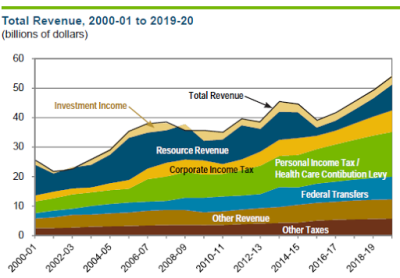 Alberta resource revenues had been close to $9 billion but are forecast at under $3 billion in the current fiscal year. By comparison, Norway’s 2015 budget projects $55 billion in oil industry revenues. (Note: The population of Alberta is about 20% less than that of Norway.)

Nikiforuk is correct that Alberta Conservatives represented oil and its multinational extractors rather than the general population. However, that was not because government depends substantially on petroleum industry taxation. Clearly the industry employs many people and is a large consumer of goods and services. The resulting economic activity results in payment of personal and corporate taxes by the general population. As a result, taxation and representation are not decoupled, as Nikiforuk argues.

I respect this writer’s entire body of work but I wonder if he fears to offer the bold prescription that is needed. Even Albertan progressives hesitate to state what seems obvious to outsiders, which is that fossil fuel extractors are not paying a fair share of value to owners of the petroleum resources they exploit. According to the Winnipeg Free Press, the Progressive Conservative Association of Alberta struck a faustian bargain by selling out to the oil industry.

Leif Wenar holds the Chair of Ethics at King’s College London. His Property Rights and the Resource Curse includes:

That assumption is subverted by force in less developed parts of the world. Elsewhere the subversion is by propaganda and influence peddling. Author Donald Gutstein has written about:

“the incestuous relationship” between the mainstream media and big business. He writes that, because of the success of its corporate propaganda, business is not just one voice among many in the democratic debate: “It controls the debate.”

Regular readers won’t be surprised that I agree with the words above. British Columbia’s ruling politicians are less concerned than recent Albertan counterparts about gaining value from natural resources. Rather than taking a low level of taxation from mining and petroleum industries, Christy Clark’s government is actually subsidizing producers with funds taken from other taxpayers.

Shockingly, BC Stats reports that oil and gas extraction employs only 0.27% of the provincial workforce. Mining directly employs 0.58%. So, despite all of the spin doctoring from Christy Clark’s government and the massive business subsidies it provides – such as the almost $1 billion northwest electricity transmission line – these extraction industries employ a fraction of the people working at food and beverage retailers. You won’t find that information reported on the business pages of daily newspapers.

The political attention and favours granted to resource industries – forestry excepted – demonstrates two things: the strength of the business lobby and the corruption of the BC Liberal Party.