This item, first published in July 2015, is amended with data to November 2016 as published by BC Stats and reference to a January 2017 statement from NDP Leader John Horgan:

“We’ve lost 30,000 forest jobs in this province since the B.C. Liberals took power. The only logs that leave B.C. should be the logs that we can’t use in B.C. communities, in B.C. mills and B.C. wood-product manufacturing.”

“Christy Clark’s government has a history of sending more and more jobs and logs offshore every year. Some of the companies doing this have been among her largest political donors over the years, and that raises questions about why Christy Clark has sat back and watched thousands of people lose their jobs and hundreds of mills close in communities across the province,” said Horgan…

I aim to demonstrate trends that allow conclusions to be drawn from real data. Values are converted to 2016 dollars using Bank of Canada currency data published January 2017.

Put simply, we are exporting substantially more raw lags by volume but recording a little more than half of the value per cubic metre than the province used to realize. 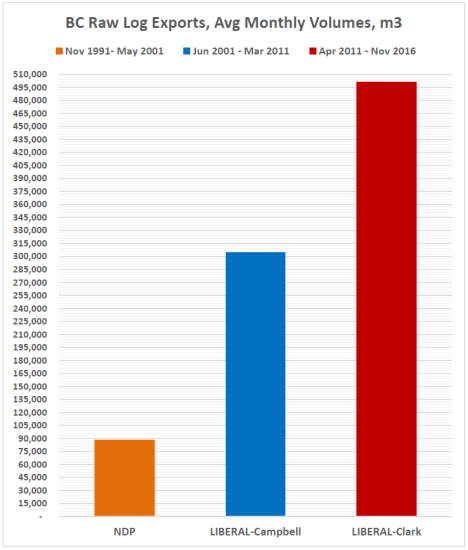 The chart demonstrates that export of raw logs, measured in cubic metres, during the Christy Clark tenure, is 567% of what was experienced in ten years of NDP administration.

Surprisingly, the unit value paid to exporters – they reported – declined by almost half, measured in current dollars. 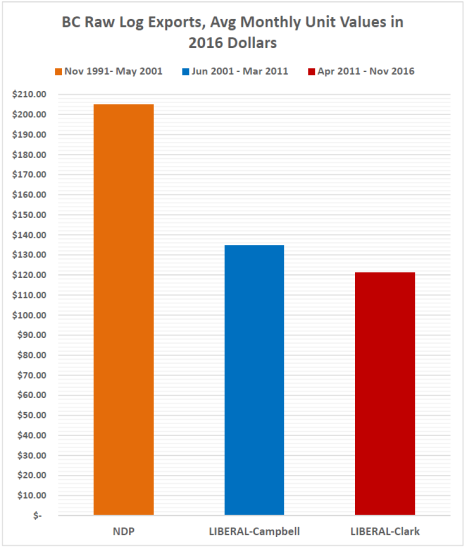 What does not surprise is that, with increased focus on exporting unprocessed timber, British Columbia has experienced substantial loss in forestry related employment. During 2016, jobs in forestry and support activities totalled 56% of the number of people employed in 2000. 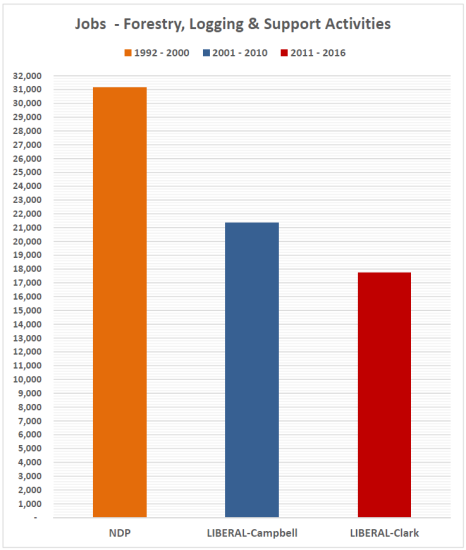 I encourage you to scroll through earlier entries here about log exports. One item includes the following points:

Today’s government believes that serving the multinational corporate agenda is Job One. There is no political vision for the future, no desire for British Columbians to be more than hewers of wood and drawers of water. If it were different, government would decide to promote value-added efforts. However, that would displease influential supporters who profit from the present system. Again, the easy road is to export unprocessed resources.

The tough choice, although the appropriate one for the long term, would be to ensure substantially more value-added activity in British Columbia.

Liberals are particularly devoid of vision because their only real expertise is selling. Like prostitutes and drug dealers, they aim for quick scores. Their disregard for wood industries and their thoughtless embrace of foreign LNG operators prove this true.

A link to this video was suggested by a reader, in comments.