It will get worse for BC Hydro ratepayers

If you are paying attention to the affairs of BC Hydro, you know the utility is in financial trouble.

However, it is electricity consumers that are feeling the pain. Unfortunately, with billions of dollars in phony assets to be written off, a growing power supply that outstrips static demand, payments to private power producers at three times market price and an export market awash in surplus power, the economic agony dealt by BC Hydro will accelerate.

British Columbia’s electricity consumers, who’ve recently experienced substantial rate increases, face onerous new charges. The only alternative is for the province to provide subsidies worth many billions over the next decade. 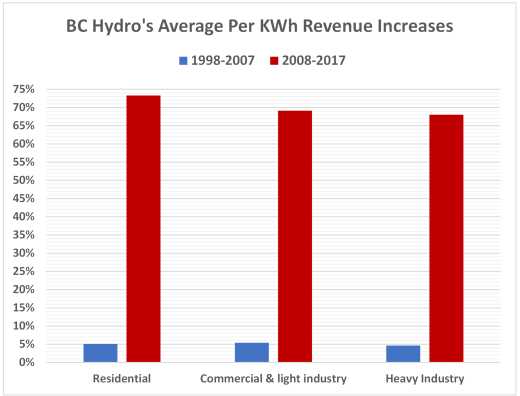 They were wrong. Dead wrong.

After Enron failed, private power producers (IPPs) — many of them new to the business and directly associated to BC’s governing political party — knew the American market would not guarantee profits. They asked government to have BC Hydro’s ratepayers ensure lucrative returns. Liberals obliged.

As a result, BC Hydro was required to make long-term contracts for private power with inflation protected prices not tied to market value of electricity delivered. In addition, the public utility invested heavily in high voltage lines to collect and distribute power.

I fear there is no easy solution. Burdening consumers with significantly higher electricity rates harms the economy. So does borrowing money to shift the burden from today unto tomorrow.

BC Hydro must go on a diet of austerity, reducing its internal and external costs. It must be run as an insolvent company.

Every possibility should be explored to cancel IPP contracts and a new management must mandate accurate load forecasting and make a major commitment to conservation by consumers.

And, of course, Site C should be cancelled, with demand increases in the next two decades met with locally generated wind and solar facilities or by geothermal power.