We have the answers, now for the questions 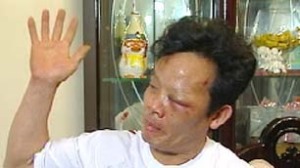 A 44-year-old man is recovering from numerous injuries in a case of mistaken identity by the Vancouver Police early Thursday morning, while they were investigating a domestic dispute. Police admit they didn’t realize there were two suites in a house on Lanark and 49th and went to the wrong door. The VPD claims the man resisted by striking out at the [plain-clothes] police and trying to slam the door . . .

“The sole occupant of the vehicle, a 39-year-old North Vancouver man, got out of the vehicle and refused to comply with the officer’s commands. The [RCMP] officer made a decision to fire his service weapon,” said Houghton earlier… “The man was shot in the torso area and was taken into custody,”

Houghton said the VPD could spend up to two weeks interviewing witnesses before issuing a public statement.

Notice that the first statements issued by police after problematic incidents are exculpatory. While seldom represented as the whole story, initial reports usually justify actions of law enforcement officials. Media relations people see that as their default duty, an automatic aim to cover ass.

Examine the VPD response after Yao Wei Wu, a law abiding man, was beaten in the doorway of his home by two plainclothes police officers who were at the wrong address. The first VPD statement claimed the man had resisted arrest and tried to strike the officers. What was the intended message here? Obviously, that the beating was justified by the man’s lack of cooperation. His right to defend himself when lawfully in his home and confronted in the early hours of morning by two unidentified strangers, dressed is street clothes, is ignored. The clear implication is that the injured party deserved the treatment he received.

That initial statement, aimed at faulting the victim, was given to the public with notice that an investigation would be conducted. So, why was the VPD spokesperson issuing a statement justifying the actions of two police officers before the situation was examined?

VPD Chief Jim Chu deserves credit for taking a quick and direct role, apologizing to the victim and his family, retracting the first statements of his media officers and promising accountability for the incident. What a difference from the way the RCMP handles their blunders.

Police Chief Chu took the actions that an honorable man in his position should take. He responded appropriately in the early part of this situation. However, there are problems remaining that he should address.

First, the media relations office needs retraining or restaffing. Their job is to accurately portray police information to the public, not to serve up knee-jerk defenses aimed at minimizing misconduct of officers. Stop using loaded terms, such as “known to police” when hinting at a message you are not prepared to give explicitly.

Secondly, it is unacceptable to beat a man because officers consider him uncooperative. Violence should not be the first reaction, particularly in the absence of verbal communications. Do these and other officers need reeducation? Are assault charges pending?

In the RCMP shooting noted above, an unarmed person with mental illness was shot, not for attacking an officer, but for failing to follow commands. Nurses and psychiatric workers interact with troubled people regularly but don’t resort to shooting anyone. It should be unacceptable for police to do so, particularly with no person under threat and in the first moment of contact. Nevertheless, because we tolerate it and do not train alternative responses, countless mental patients have been executed on the streets by police.

Regardless of the actual circumstance of the shooting, I object to the public statements made afterward by police, both RCMP and VPD media spokesmen. Again, the first comments were exculpatory. RCMP announced that the victim was involved in criminal behavior immediately before he was shot. They made no mention of the fact Wilcox was unarmed, mentally disturbed and not violent. The so-called criminal behavior apparently involved driving offenses, not capital crimes.

VPD, assuming the role of “independent” investigator, reinforced the incomplete RCMP statements and said the man was shot because he was unresponsive to commands. They could not know that independently because they were just beginning their examination of the circumstances. Clearly, the concept of independent investigation is a sham when it involves two police forces, especially when they are neighbors in the habit of swapping roles between being conductors and subjects of “independent” investigations.