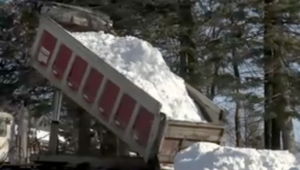 We hear reports today of a truck fleet doing 500 km round trips, hauling snow from Manning Park to Cypress Bowl. Could this be true? Well, not likely, according to information that came two weeks ago from Games Organizers.

VANOC has been running an intensive snow salvage project to conserve snow, including stockpiling snow at higher elevations.

State-of-the-art snow making using 35 snow guns has been operating around-the-clock since November and has converted over 95.3 million litres of water (21 million gallons) to snow needed to construct the courses. This snow has been stockpiled all over the mountain to ensure the terrain at Games time can sustain all weather conditions. Over the next three weeks, the snow will be pushed down the mountain by snow grooming machinery where it will be shaped by machine and by hand to create the freestyle and snowboard courses, including the 60-metre-long superpipe, which is 19.5 m to 20 m wide and 6.5 m high.

Trucking snow from the North Cascade Mountains. . .
to the coastal range was unmentioned a few days ago when organizers hosted the press for reassurance about the snowboard and freestyle skiing venue. According to the National Post:

More than 1,000 hay bales — each weighing 450 kilograms — have been transported to the venues; these are now being stacked and covered with natural snow airlifted or pushed down the mountain from higher elevations, where it is far from scarce.

For good measure, 35 snow guns continue to blast artificial snow all over the mountainsides, producing a frozen, winter-white effect for spectators, and what high-performance winter athletes will recognize as a good base for sliding. Man-made snow is “more resilient” than real snow, reporters were reminded. It lasts longer. Since November, Cypress has converted almost 100 million litres of water into fake snow.

Even those who believe the Corporate Olympics should be buried deep in a waste pit with other toxic excesses recognize that VANOC must do whatever it takes to ready the facilities for international competition. Why though do spin-masters subject us to lame deceptions and over-optimistic accounts of every task they face, only to be forced to amend stories when reality becomes apparent to all.

First, there was lots of snow, the deepest early base ever. Then, they had stockpiled plenty of snow, waiting to be pushed down the mountain. Next, the helicopters are buzzing from one mountain top to another. Now, trucks move snow from a distant mountain range.

One day, someone warns us of three hour transit waits during the Games. The next day, they realize that didn’t sound good so they change the estimate to a one hour wait. Sponsorships were “over subscribed” or they were at least until VANOC admitted a shortfall they hoped the IOC would resolve. At least, the extra costs are covered. No bill will go unpaid because the contingency fund is unlimited, thanks to BC taxpayers.

VANOC has been issuing 2010 Sustainability Reports, evaluations of its own waste not, want not activities. Their self-reporting scores high. I wonder how Cypress Bowl will affect those? But, maybe they’re using organic hay, pine beetle lumber, fuel efficient helicopters and hybrid tractor trucks. It will be good news when the spin is complete.