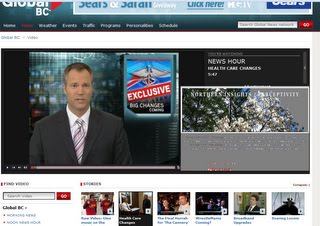 Today, Global TV is applauding their ‘exclusive’ role in broadcasting the Kevin Falcon press release news story about patient centered funding in hospitals. Global says big changes are coming that will be announced next week to less friendly media.

In reports, Global is conflating disparate issues. Thursday News Hour introduced a man who had successful spinal surgery at Lions Gate Hospital. They showed LGH surgeons and claimed this great care was achieved by the results oriented funding that is proposed for much of BC’s hospital system. I had a total knee replacement at LGH in 2007 and they were already running a fast track surgical joint replacement clinic, without benefit of this so called new funding system. I was in and out of hospital in less than 48 hours.

While I’m sure the Minister and advocates of a private health system were pleased, I see this as irresponsible, agenda driven reporting. It is prima facie evidence that the BC Liberal Government is in league with Canwest Global news operations, in print and in broadcasts. Here is a story about public business dealt out as an exclusive by Kevin Falcon, Mr. Big of BC political manipulation. Apparently the quid pro quo that Global TV paid was more softball treatment of Liberal scandals.

Tonight, Keith Baldrey barely mentioned the Casino influence peddling story, using 11 seconds to report the NDP will raise the controversy in next week’s question period. No detail, no timelines, no background. Global TV is almost ignoring the scandal, which The Gazetteer calls ‘Casino Royale’.

This is the treatment they gave BC Rail, “Move along folks, nothing to see here.”  In Casino Royale, the house has been exposed; caught red-handed, cheating in a rigged game.

We’ll talk later about health system changes. It is enough to say now that bureaucrats, politicians and hangers-on (the Premier and his schedule mistress included) toured the world, studying healthcare in the world’s great cities. Paris, after all, is particularly beautiful, any time of year. Finally, they are ready to bring down a policy change. Patient centered funding. Tried before? Yes. Will it last? No.

To manage healthcare in British Columbia, we pay substantial salaries to unqualified ministry officials and patronage appointees. As a result, senior personnel have been incompetent and inexperienced and the management system functioned poorly. That led to introduction of new managers, mandated to fix continuing problems. New people are there to make changes. So they do.

The most obvious innovations have been employed and discarded by earlier regimes. In truth, management systems evolve in a circular fashion, moving from A to B then C, and back to A. There are limited possibilities and each scheme, while new to the team that implements it, is old hat to jaded workers who watch management teams come and go.

As always, excellent healthcare depends on the integrity of patient level care providers.
.