Sacrifices must be made 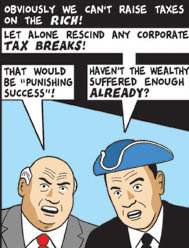 Global TV and their media partners want you to know we cannot afford reasonable healthcare because economic affairs are so bad that we’ve had to freeze the minimum wage for a decade. But, here is one radical news source that hints at something else:

From the The Financial Times, March 2/11

The top 10 hedge funds made $28bn for clients in the second half of last year, $2bn more than the net profits of Goldman Sachs, JPMorgan, Citigroup, Morgan Stanley, Barclays and HSBC combined, according to new data.

Even the biggest of the hedge funds have only a few hundred employees, while the six banks employ 1m between them. According to the data, the top 10 funds have earned a total of $182bn for investors since they were founded . . .