The dead cannot cry for justice; the living must do it for them.

Note:  RCMP Corporal Monty Robinson is due in Surrey Provincial Court on a charge of obstructing justice April 18 2011. 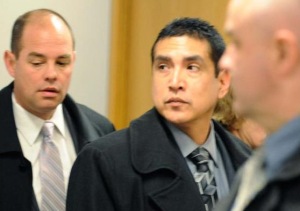 October 14 2007, Cpl. Monty Robinson led a squad of four RCMP officers when they attacked and tasered an unarmed airport traveler who had caused a minor disturbance. After less than a minute of contact, Robert Dziekanski was dying on the ground. RCMP officers gave him no first-aid, even refused to remove shackles so that emergency first-responders, when they did arrive, could move the unconscious victim into a recovery position for resuscitation efforts.

The victim’s urgent need was not Monty Robinson’s first concern.

The Globe and Mail reported that one year later, off duty Cpl. Robinson…

was involved in a collision just after 10 p.m. Saturday night between his Jeep and a motorcycle driven by Orion Hutchinson, 21, on a quiet two-lane street. Witnesses say the officer left the scene of the crash, and later blew over the legal limit for alcohol.

After the crash, [a] woman saw the officer hand his driver’s licence to another witness before leaving the scene on foot with his two children who were in the car. He didn’t appear to attend to or check on the injured Mr. Hutchinson, she said.

He got out of his Jeep, handed his licence to somebody and ran down the road with a kid in each hand,” the witness said. “Maybe he could have saved that kid’s life? He’s a policeman, he must have had first-aid training.

Untrained witnesses then attempted to perform CPR on Mr. Hutchinson until emergency crews arrived, guided by a 911 call-taker over a cellphone, the witness said. Mr. Hutchinson died at the scene.

The victim’s urgent need was not Monty Robinson’s first concern.

More than a year after Orion Hutchinson’s death, the Criminal Justice Branch of the Ministry of Attorney General, declined to proceed on recommended charges but did allow one against Robinson of attempting to obstruct justice, based on his alleged actions after the fatal collision.

April 18, 2011 a Preliminary Hearing is set to begin in Surrey Provincial Court. Robinson is expected to attend court for the first time. In the course of six remand hearings leading to his not-guilty plea, the RCMP officer has been represented by a lawyer without appearing himself.

After the October 2009 collision, BC’s Superintendent of Motor Vehicles made an administrative suspension of Robinson’s driver’s licence, based on reports reviewed in Supreme Court, which included:

Based on the evidence before me I am satisfied on a balance of probabilities that your BAC was due to alcohol you consumed before or while operating or having care or control of the motor vehicle.

I therefore confirm your driving prohibition, as required by s. 94.6 of the Motor Vehicle Act. You are prohibited from driving for 90 days, commencing December 11, 2008. You may resume driving once you have obtained a driver’s licence from the Insurance Corporation of British Columbia.

Placed in the context of all the other evidence, including the inherent inconsistency in the petitioner’s statement at the scene, the adjudicator’s credibility determination was within her jurisdiction and well within the standard of reasonableness. There is accordingly no basis on which this court may intervene. The petition is dismissed.

Citizens can only wonder why anonymous bureaucrats in the Criminal Justice Branch judged Robinson not guilty of impaired driving causing death instead of allowing charges recommended by police to be heard in open court. Taken with knowledge of the CJB’s pattern of procedure in all cases involving police as potential defendants, the Attorney General’s treatment of police Cpl. Robinson, is simply business as usual. Of hundreds of citizen deaths following police interaction, the number of serious charges against law enforcement officers stands at zero.