Whether Gas is Cleaner than Coal, Abraham Lustgarten, ProPublica:

In January, a ProPublica investigation found that large amounts of “fugitive” emissions were left out of common comparisons between coal and gas and that if these emissions were counted the advantages of natural gas dwindled. Our report found that the Environmental Protection Agency’s emissions estimates from hydraulic fracturing in shale formations were 9,000 times higher than the agency had previously estimated. We also quoted Robert Howarth, a Cornell University professor, saying that he would soon release research that showed that the emissions from gas were even worse.

More details of Howarth’s research, which is reportedly scheduled to be published in the journal Climatic Change, were released by The Hill and The New York Times this week. Howarth’s conclusion — that shale gas production is actually far dirtier than coal in terms of greenhouse gas emissions — is attracting national attention.”

The problem, the studies suggest, is that planet-warming methane, the chief component of natural gas, is escaping into the atmosphere in far larger quantities than previously thought, with as much as 7.9 percent of it puffing out from shale gas wells, intentionally vented or flared, or seeping from loose pipe fittings along gas distribution lines. This offsets natural gas’s most important advantage as an energy source: it burns cleaner than other fossil fuels and releases lower carbon dioxide emissions.

“The old dogma of natural gas being better than coal in terms of greenhouse gas emissions gets stated over and over without qualification,” said Robert Howarth, a professor of ecology and environmental biology at Cornell University and the lead author of one of the studies. Mr. Howarth said his analysis, which looked specifically at methane leakage rates in unconventional shale gas development, was among the first of its kind and that much more research was needed. 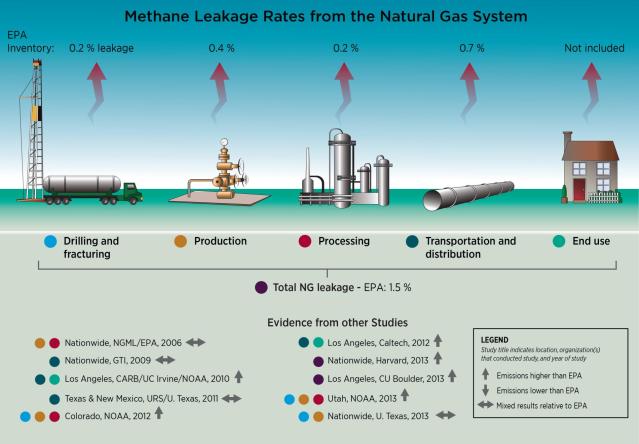