Frank Rich wrote an interesting op-ed in the New York Times a few months ago. I thought of it again after reading another story in the news recently. I think the dots connect. Rich’s NYT piece examined organizers of America’s leaderless populist uprising, the tea-partiers. Of course, like most spontaneous movements, this requires considerable organizing effort and ample supplies of cash.

…the latest incarnation of what the historian Kim Phillips-Fein labeled ‘Invisible Hands’ in her prescient 2009 book of that title: those corporate players who have financed the far right ever since the du Pont brothers spawned the American Liberty League in 1934 to bring down F.D.R.

You can draw a straight line from the Liberty League’s crusade against the New Deal “socialism” of Social Security, the Securities and Exchange Commission and child labor laws to the John Birch Society-Barry Goldwater assault on J.F.K. and Medicare to the Koch-Murdoch-backed juggernaut against our “socialist” president. 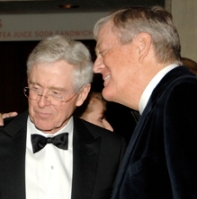 David Koch was the Libertarian Party’s VP candidate in the 1980 presidential election. He and running mate Ed Clark promised to abolish Social Security, the Federal Reserve Board, welfare, minimum-wage laws, corporate taxes, all price supports and subsidies for agriculture and all U.S. Federal regulatory agencies.

Koch’s views have not moderated but his methods of political operation have shifted dramatically. The Koch brothers do not aspire to hold elected office, they merely aim to control those who do. They believe, not in democracy, but survival of the fittest, literally. Can’t afford medical care? Go ahead and die. Can’t afford to feed your children? Sell them. Pay too much income tax? Take it off-shore and cheat.

Uber-wealthy libertarians, since they don’t believe in government or social programs, feel no shame over shameless corporate outlaws. Like banks. Do you remember when bankers were respected members of the community interested in serving ordinary citizens, living in ordinary communities? No longer.

In the second news item, Richard Eskow looked at six of America’s largest banks, asking which was “the most shameless corporate outlaw.” This competition between six is a pick’em, likely to end in a six-way tie. Read through that article, check out the validity of allegations and then I invite you to consider if you want Invisible Hands of the rich and super-rich shaping the world we live in. Are you ready to enable the rule of mega-corporations through ‘self regulation’? Many BC Liberals are ready.

People similar to the Koch Brothers are funders of the widespread network of right wing, libertarian, corporatist groups in Canada that aim to enable this country’s Invisible Hands. The Canadian Taxpayers Federation, even after they were caught spreading tax misinformation this week, unashamedly continued the campaign. As Spartikus said:

They’re merchants of doubt, not of intellectual integrity.