Salt Spring Forum and Salt Spring Island Conservancy hosted noted western Canadian journalist Andrew Nikiforuk Wednesday to hear details of his new book, Empire of the Beetle. It is an examination of “how human folly and a tiny bug are killing North America’s great forests.”

My wife and I were part of Nikiforuk’s capacity audience at Artspring, the island’s centre for the arts. By chance, I sat next to Dr. Michael Byers, a legal scholar and author who is Canadian Research Chair in International Law and Politics at the University of BC. Self-described environmental activist Byers is widely recognized for expertise in Arctic sovereignty and international relations. Last April, I wrote a short profile of the professor in this piece: Addition to list of blogs I follow.

“Canada’s leading muckraker about Canada’s most controversial muck: the tar sands of Alberta.” 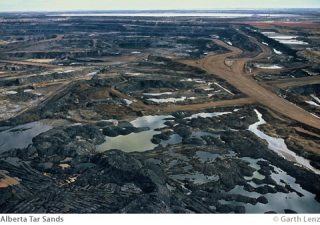 His book, Tar Sands: Dirty Oil and the Future of a Continent is an astonishing document. Until reading it, I had no accurate sense of my own ignorance about the tar sands. Nikiforuk says,

“To extract the world’s ugliest, most expensive hydrocarbon, we are polluting our air, poisoning our water, destroying vast areas of boreal forest, and undermining democracy itself.”

Clearly, I should have been more contemptuous of the industry’s high powered public relations campaigns. The author says that when his book’s first edition was published in the fall of 2008, Alberta government officials and industry lobbyists condemned it, charging the book was grossly inaccurate, despite Tar Sands being largely based on data created by government and the petroleum production industry. Others claimed it was hate literature aimed at oil executives or a lie that did not differentiate between fact and opinion. However, many insiders admit the book is an accurate, if unpleasant, portrait of disorderly development of the tar sands.

Empire of the Beetle examines another disaster in nature; one that is partly anthropogenic. The death of 30 billion trees and the unsettling of North American forests has something in common with the ravaging of Canadian fisheries, first on the Atlantic coast and now, the Pacific. I recently spent time listening to scientific testimony at the Cohen Commission, where both government and the fish farm industry focused on limiting the inquiry to the decline of one species within one river. The Commission’s terms of reference direct it to examine Fraser River Sockeye and proceed,

“without seeking to find fault on the part of any individual, community or organization…”

That charade is no effort to identify comprehensive and interrelated factors threatening west coast fisheries. The insincere effort will enrich limos full of lawyers and spin doctors and the ocean environment will decline until wild salmon are merely memories held by senior citizens. Had the government of Canada commissioned Andrew Nikiforuk to put west coast fisheries under his microscope, the public would have gained a concise, thorough and readable report explaining failures and lost opportunities in ocean resource management. Additionally, he would have been able to point his finger at those organizations deserving labels of fault. 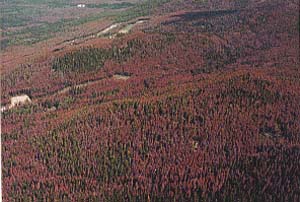 Nikiforuk generates a mixture of moods in Empire of the Beetle. Perhaps surprisingly, the author maintains a sense of natural wonder and optimism. He acknowledges the role of insects in natural forest renewal but there is fault to be shared for uncontrolled outbreaks of destruction that began in the late 20th century. The book claims,

“Misguided science, out-of-control logging, bad public policy, and a hundred years of fire suppression created a volatile geography that, with the advance of global warming, released the world’s oldest forest manager from all natural constraints.”

My comparison with fisheries holds true for the science of bark beetle infestation in Canadian forests. At the Cohen Commission, testimony repeatedly referred to science that was inadequate for an understanding of fish stock declines or even year to year variability. In one example, Nikiforuk recounts beetle attacks affecting trees in Tweedsmuir Provincial Park. Two million acres of largely inaccessible wilderness seemed to be outside the range of the insects yet hundreds of thousands of lodgepole trees were fatally affected. Initially, authorities burned sections of forest but they came to realize that their efforts were in vain. They also learned that Tweedsmuir was only one outbreak among tens of thousands. Nikiforuk indicates why protectors of the forest were utterly impotent. They lacked necessary science.

“Normally, a fading forest on Tweedsmuir’s scale would have grabbed the attention of someone at Canada’s Forest Insect and Disease Survey (FIDS). “I think FIDS would have noticed it by 1995 at least,” says [Allan] Carroll, [one of Canada’s foremost insect ecologists]. But by then the federal agency no longer existed. Although trees cover a third of Canada, the world’s largest exporter of forest products decided in 1996 that it no longer needed a national insect intelligence or forest health service.”

Readers, if you want a better understanding of two of the largest environmental issues affecting western Canada, buy Andrew Nikiforuk’s books and dedicate time to read them carefully. Oil industry spin doctors have put considerable energy into an effort to discredit Tar Sands and, with hundreds of billions of dollars at stake, their offence has been well financed.

The Calgary writer is an extraordinary example of a dedicated journalist unafraid of confronting powerful economic and political forces. If you have the opportunity to meet and talk with Nikiforuk, take advantage; you will be proud you did.

Two years ago, The Toronto Star published A public tarring in Saudi Canada, Andrew Nikiforuk’s rather shocking account of appearances before the House of Commons standing committee on environment and sustainable development. Excerpts:

“We [A.N. and family physician Dr. John O’Connor] didn’t ask to appear; the committee invited us. As such, we naively assumed that we were doing our duty as Canadians to speak to the House about the impact of world’s largest energy project on water: 130 square kilometres of waste water, acid rain, fish deformities, rare cancers and city-scale withdrawals of freshwater.

“We assumed that all committee members would be interested in rigorous dialogue regardless of political affiliation. But that’s not what Ottawa delivered. Instead, several Tory MPs subjected us to abusive Republican tactics geared to dismiss, discredit and dishonour.

“… four Conservative MPs on the committee, Peter Braid [Kitchener-Waterloo, ON], Mark Warawa [Langley, BC], Blaine Calkins [Wetaskiwin, AB] and Jeff Watson [Essex, ON], spent most of their time attacking our credibility. They didn’t want to talk about water.

“…they expressed no interest in the conservation of trees and water. They simply belittled me for writing an opinion piece about how oil hinders democracy. They couldn’t even hear the irony in their own frat-boy mockery.

“At the end of the session, both O’Connor and I reflected on the hearing in disbelief. In Norway, we civilly engaged investors, politicians and environmental groups. We had the right to express differing opinions. We enjoyed the great freedom of association. Yet in Canada, several so-called parliamentarians openly belittled these basic freedoms.”