I am writing to ask for your progress report on the thousands of silver-bright sockeye and now Coho that are floating dead down the Fraser River tributaries feeding into the Harrison River. People on the river say this has been ongoing since early August reaching upstream of Harrison Lake and estimate 100,000 sockeye have died in this area without spawning.

When I was on the stand at the Cohen Inquiry the lawyer for Canada prevented me from presenting the information I gathered on disease from the 500,000 government documents provided to the Inquiry. Among other things, I found that you appear to have had a direct role in waiving the Fish Health Protection Regulations for exotic egg imports on request from the Norwegian salmon farmers. It looks like you are attempting to suppress information that your scientist, Dr. Miller found suggesting that the Fraser sockeye salmon have been dying of a virus since 1992, which is exactly when salmon feedlots were placed on the Fraser sockeye migration route. I was prevented from telling Justice Cohen that your scientists do not have the support they need from you to do the required sampling to figure out why very large numbers of Fraser sockeye are dying just before spawning. They have written numerous emails on this that I read as a participant of the Inquiry. I also read their frustration with you trying to keep this from the public.

On the stand you informed us that you do not review the farm salmon disease records, even though one of your scientists published in a top scientific journal that a form of fish cancer may be in our sockeye and this cancer has been reported by other DFO scientists in farm salmon in the journal CANCER RESEARCH.

I am now examining the brains of these dying salmon myself, because I have lost all confidence in DFO. On my trip up the Fraser River two days ago I also found four yellow pink salmon. 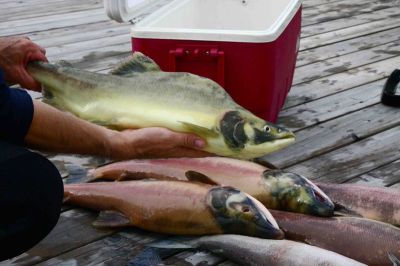 While you testified that you have not read the salmon farm disease records, I have read every line and note that the Provincial vet Dr. Gary Marty is diagnosing a form of jaundice in farm salmon that he states is similar to a virus found in Coho in Chile, he cites a paper by P.A. Smith et al 2006. I want your report on these jaundice farm salmon and the jaundice pink salmon DFO must be aware of – why are they yellow, why are there so many of them, is this the Chilean virus Dr. Marty notes and how would such a virus get here? We know some of the fish farmers in BC also have operations in Chile. Funding provided by the public is currently being used to study jaundice that is killing farm Chinook salmon. Please send a progress report to us.

Dr. Richards there is something very wrong here, the salmon are dying and DFO is suppressing their own people who are closest to figuring this out. I am forwarding this letter to the over 20,000 people on my mailing list and we want your report on what DFO is doing and who is doing it. We want the diagnosis on the yellow salmon. We want to know if we a getting a side order of brain tumour in the salmon we are eating. Please give us a timeline on receiving this information and when we can expect updates from you.

Who is providing samples to Dr. Miller’s lab of the dying sockeye? Miller is the only DFO scientist working on the sockeye I trust after observing so many of you on the stand at the Cohen Inquiry. Please let us know how much funding you have provided to Miller’s lab for further work on why the Fraser sockeye salmon are dying, do they have a virus, what is the virus, where is it coming from and is it causing brain tumours?