So they arrested the reporter, not the bankers 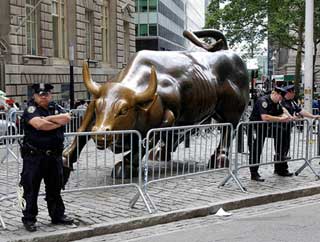 “Goldman Sachs, which received more subsidies and bailout-related funds than any other investment bank because the Federal Reserve permitted it to become a bank holding company under its “emergency situation,” has used billions in taxpayer money to enrich itself and reward its top executives. It handed its senior employees a staggering $18 billion in 2009, $16 billion in 2010 and $10 billion in 2011 in mega-bonuses. This massive transfer of wealth upwards by the Bush and Obama administrations, now estimated at $13 trillion to $14 trillion, went into the pockets of those who carried out fraud and criminal activity rather than the victims who lost their jobs, their savings and often their homes.

“Goldman Sachs’ commodities index is the most heavily traded in the world. Goldman Sachs hoards rice, wheat, corn, sugar and livestock and jacks up commodity prices around the globe so that poor families can no longer afford basic staples and literally starve. Goldman Sachs is able to carry out its malfeasance at home and in global markets because it has former officials filtered throughout the government and lavishly funds compliant politicians—including Barack Obama, who received $1 million from employees at Goldman Sachs in 2008 when he ran for president. These politicians, in return, permit Goldman Sachs to ignore security laws that under a functioning judiciary system would see the firm indicted for felony fraud…”