What happened to Canada?

Corporations Have No Use for Borders, Chris Hedges, Truthdig 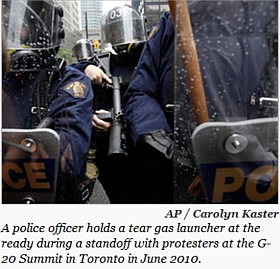 “What happened to Canada? It used to be the country we would flee to if life in the United States became unpalatable. No nuclear weapons. No huge military-industrial complex. Universal health care. Funding for the arts. A good record on the environment.

“But that was the old Canada. I was in Montreal on Friday and Saturday and saw the familiar and disturbing tentacles of the security and surveillance state. Canada has withdrawn from the Kyoto Accords so it can dig up the Alberta tar sands in an orgy of environmental degradation. It carried out the largest mass arrests of demonstrators in Canadian history at 2010’s G-8 and G-20 meetings, rounding up more than 1,000 people. It sends undercover police into indigenous communities and activist groups and is handing out stiff prison terms to dissenters. And Canada’s Prime Minister Stephen Harper is a diminished version of George W. Bush. He champions the rabid right wing in Israel, bows to the whims of global financiers and is a Christian fundamentalist…

“The voices of dissent sound like our own. And the forms of persecution are familiar. This is not an accident. We are fighting the same corporate leviathan.

“The decay of Canada illustrates two things. Corporate power is global, and resistance to it cannot be restricted by national boundaries. Corporations have no regard for nation-states. They assert their power to exploit the land and the people everywhere. They play worker off of worker and nation off of nation. They control the political elites in Ottawa as they do in London, Paris and Washington…”