5 years in jail for masked instigators of unrest

Stephen Harper’s government supports Bill C-309, a private members bill before the House of Commons. It will enable individuals to be jailed five years for wearing a mask or other disguise to conceal identity during a riot — which can be defined as an unlawful assembly that results in a breach of the peace.

This is good news because we’ve seen a growing trend of masked men on the streets for the purpose of disrupting the peace and interfering with democratic expressions of opinion.

Canada’s Justice Minister says “reckless behaviour damages communities and should not be tolerated.” Of course, we must do more than simply talk. That includes construction of gulags and psychiatric hospitals to hold and re-educate dissidents and creation of facilities, as UK Prime Minister Cameron said, to “stop people from communicating” on social media during times of unrest. Most importantly, we must rearm and expand police and military enforcement authorities.

Initiatives ensuring that authorities have the means to quell dissent are already under way. Americans are a little ahead of us, but Canada’s Conservative government will ensure we catch up soon. 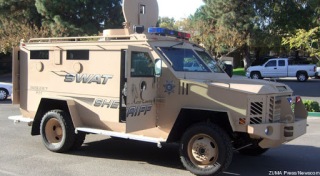 “The Sheriff’s Department in Bossier Parish, Louisiana announced a plan in 2010 to train local volunteers to use shotguns, riot gear and a .50-caliber machine gun mounted on what the sheriff called a “war wagon.” The program was part of “Operation Exodus,” a plan to prepare for a potential terrorist attack or local unrest in the area.

Though it may seem unlikely that Bossier Parish would ever have a need for a “war wagon,” this small town’s pursuit of a powerful, weaponized vehicle is just the tip of the (bullet-proof) iceberg, and reflects an increase in military-grade tanks sought after — and acquired — by local law enforcement departments across the country…” 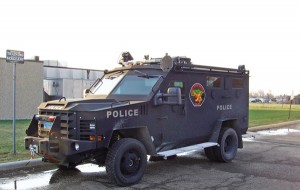 “If terrorists ever target Fargo, N.D., the local police will be ready.

In recent years, they have bought bomb-detection robots, digital communications equipment and Kevlar helmets, like those used by soldiers in foreign wars. For local siege situations requiring real firepower, police there can use a new $256,643 armored truck, complete with a rotating turret. Until that day, however, the menacing truck is mostly used for training runs and appearances at the annual Fargo picnic, where it’s been displayed near a children’s bounce house.

… Since Occupy Wall Street and similar protests broke out this fall, confusion about how to respond has landed some police departments in national headlines for electing to use intimidating riot gear, pepper spray and rubber bullets to disperse demonstrators. Observers have decried these aggressive tactics as more evidence that police are overly militarized. Among them is former Seattle police chief Norm Stamper, who today regrets his “militaristic” answer in 1999 to the infamous “Battle in Seattle” protests.

Many police, including beat cops, now routinely carry assault rifles. Combined with body armor and other apparel, many officers look more and more like combat troops serving in Iraq and Afghanistan. The list of equipment bought with the federal grants reads like a defense contractor catalog. High-tech gear fills the garages, locker rooms and patrol cars in departments across the country.

…But the gear also can be used for heavy-handed – even excessive – tactics. In one case, dozens of officers in combat-style gear raided a rave in Utah as a police helicopter buzzed overhead. An online video shows the battle-ready team wearing masks and brandishing rifles as they holler for the music to be shut off and pin partygoers to the ground.

The Gibson Raid: Much to Fret About, Pat Nolan, National Review, Sept 2011

With military precision, the federal officers surrounded the building, donned flak jackets and helmets, readied their weapons, burst in, and forced terrified employees out at gunpoint. Officers ransacked the facility, seizing computers, papers, and materials.

It was the second raid in three years by the Fish and Wildlife Service on Gibson, maker of the famous Les Paul guitar. The situation would be laughable, if the consequences for Gibson weren’t so dire.

The law that Gibson allegedly violated is the Lacey Act, which bars importation of wildlife or plants if it breaks the laws of the country of origin. It was intended to stop poachers. The ebony and rosewood that Gibson imported was harvested legally, and the Indian government approved the shipment of the wood. But Fish and Wildlife bureaucrats claim that, because the wood was not finished by Indian workers, it broke Indian law. In other words, a U.S. agency is enforcing foreign labor laws that the foreign government doesn’t even think were violated.

“In two cases we had a SWAT team, treating us like drug guys, come in and shut us down with no notice,” lamented Gibson chairman and CEO Henry Juszkiewicz. “That’s just wrong. We’re a business. We’re making guitars.” Juszkiewicz says the raid, seizures, and resulting plant closure cost Gibson more than $1 million.

This abusive treatment of a legitimate business like Gibson is not an isolated incident. Small businesses have been similarly raided, and their officers imprisoned, for such minor offenses as importing lobster tails in plastic rather than cardboard … and sloppy labeling on imported orchids)…

Carl Meyer’s article in Embassy Magazine demonstrates how the Harper Government is making significant changes to non-financial laws as part of the budget process, while preventing parliamentary debate on these issues.

“CNET‘s excellent technology reporter, Declan McCullagh, reports on ongoing efforts by the Obama administration to force the Internet industry to provide the U.S. Government with “backdoor” access to all forms of Internet communication…”

“What is civil disobedience?

“I ask because I’m going to be urging such a course in the times to come.

“Although he didn’t invent the idea, Mahatma Gandhi invented the modern term when he protested a tax on salt imposed by the British which hurt the poor Indian especially. He broke the law deliberately and went to jail for doing so.

“A more current example was that of the Freedom Marchers of the 1960s who challenged the segregation laws of the Southern US by “sitting in” at segregated restaurants; by Rosa Parks who defied the laws of Montgomery, Alabama, by sitting in the white only section of a bus; and by Dr. Martin Luther King who in the same time urged peaceful demonstrations.

“Many would go back much further in time to Jesus…”

“…The quest by a bankrupt elite in the final days of empire to accumulate greater and greater wealth, as Karl Marx observed, is modern society’s version of primitive fetishism. This quest, as there is less and less to exploit, leads to mounting repression, increased human suffering, a collapse of infrastructure and, finally, collective death. It is the self-deluded, those on Wall Street or among the political elite, those who entertain and inform us, those who lack the capacity to question the lusts that will ensure our self-annihilation, who are held up as exemplars of intelligence, success and progress…”

The video referred to by one of the commenters: