From March 2011, in my humble opinion, this article is worth repeating: 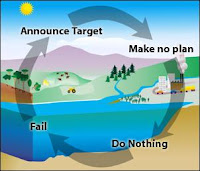 Overcrowding at Royal Columbian hospital led to shutting down microwaves in the on-site Tim Hortons doughnut shop. Emergency physicians were not worried about ovens jamming the medical equipment, they needed the space. They got it. So now, all those people complaining about giant salaries and cushy end of contract rewards for hospital bureaucrats should eat their words. How many other regions were smart enough to double purpose fast food facilities?

Multi tasking Minister of Everything Colin Hansen – no braver-man than he – flagged this as a good day,

“Patient care was appropriate. People’s needs were met in an appropriate way. It was not a normal day. It was a very, very, unusual day.”

EP Dr. Adam Lund was not quite so happy,

“Last night’s circumstance was in no way an anomaly. We, on a daily basis much of the time and certainly multiple times per week, are in the situation where we are overcrowded, where we have double parked stretchers in the hallway, where we have people in inappropriate care spaces.  … As these things become institutionalized, we complain, we complain, nobody hears, nothing changes and then, we do what we can, which is to take care of the patient in front of us.”

“Significant, documented morbidity, mortality and complaints have occurred,” states the report on congestion in the emergency department submitted to the Fraser Health Authority. . .

Morbidity refers to a patient’s condition deteriorating as a result of having to wait; mortality refers to death.

The document, titled Royal Columbian Hospital Patient Flow Redevelopment, further states that the ability of the hospital “to respond to patients with trauma injuries, in “life-and-limb-threatening scenarios is severely compromised.”

It is important to remember that the hospital’s overcrowding was fully predictable. Even a middle school student in 2001 could have examined population trends and extrapolated the demand growth sure to result at Fraser Valley hospitals. How did Colin Hansen prepare? In 2004, as Health Services Minister, he closed St. Mary’s Hospital in New Westminster, telling British Columbians it was done with the best interests of patients and a healthy system in mind.

“We . . . feel obligated to publicly declare our non-confidence in the ability of the . . . department to provide safe, timely and appropriate emergency medical care.”

“We are writing to support our colleagues at Vancouver General Hospital in their efforts to bring awareness of the deleterious effects of emergency department overcrowding to the public.”

In 2006, Dr. Sheldon Glazer had little faith the system would respond appropriately, saying that politicians and health bureaucrats should be ashamed for their many failures. Dr. Glazer is still speaking out this week about the same problems at RCH. Five years ago he said,

“It is difficult to pass the pleading faces of patients and their families and feel helpless to ease their suffering or give appropriate care. I feel like I’m trying to swim with my hands and feet tied.

“Emergency patients are assessed and treated on ambulance stretchers in hallways. They wait interminably long hours for care, often resulting in poorer outcomes, or worse . . . .

“Patients have lost any sense of privacy or respect.”

“Interventions and laboratory investigations are often missed or not done. Suspected cardiac patents wait for hours in chairs until their lab results come back, all the while at risk for sudden death.”

Colin Hansen, who will soon retire with a pension worth millions, is a shameful minister of the crown. He behaves like a psychopath, smiling while families cope with unnecessary funerals because he values a stadium roof over hospitals able to meet today’s needs, or even the needs of five years ago. He chirps blithely that the system worked,

“. . . just the way it is supposed to. . . It does happen from time to time that emergency rooms are under tremendous stress because of the number of patients presenting themselves on that day,”

As the doughnut shop story unfolded, Global TV was quick to redirect the discussion. Ted Chernecki reported Tuesday that the Canadian medical system,

“was already ranked one of the worst in the world when it comes to bang for your buck. Are we simply throwing more good money after bad?”

A 2009 article from the Harvard Business Review has a much different story: 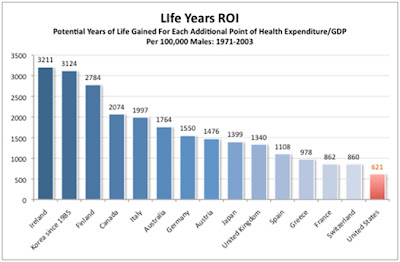 Global has a particular story to convey in partnership with the Liberal government and multi-national companies that lust after the profitable business of medical services in British Columbia. Just as Liberals designed BC Rail to fail (read the linked article for evidence) so it could be sold to friends, they are designing the healthcare system to fail so it too can be privatized.

Whenever a story of healthcare crisis surfaces, Global’s infomercialists are quick to show stock footage from Dr. Brian Day, operator of the largest private surgical center in BC.  Day says, 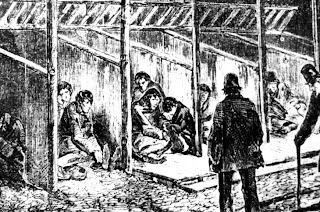 His solution, privatize the public healthcare system. If a person cannot afford a knee or hip replacement, let them do without. In fact, if you deny medical treatment to all poor people, we could afford to cut corporate income taxes yet further. Charles Dickens wrote these words about Ebenzer Scrooge being told of needy people outside the prisons and poorhouses,

“If they would rather die,” said Scrooge, “they had better do it, and decrease the surplus population. Besides — excuse me — I don’t know that.”

“It’s not my business,” Scrooge returned. “It’s enough for a man to understand his own business, and not to interfere with other people’s. Mine occupies me constantly. Good afternoon, gentlemen!”