When a kid, I lived with a marvellous black Lab. Usually a good-natured, well-behaved mutt, he discovered roast chicken unsupervised on the stove top. With no one around, temptation was irresistible and he made his move. I walked in and that chicken was on the floor, being devoured. Commands fell on deaf ears. In fact, he ate faster and growled angrily, turning in circles to shield the prize from expropriation. Dog knew the chance for real treasure might not come again so his aim was to maximize pleasures before opportunity ended. 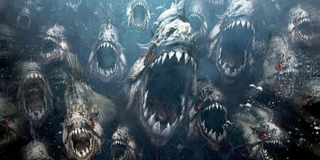 I’m reminded of the dog story because a ravenous crew of BC Liberals is involved in a feeding frenzy, working to grab maximum treasure from public wealth and property in case opportunities end on May 14, a short 15 weeks from now.

We watched Rich Coleman and BCLC CEO Michael Graydon growling angrily when Surrey council took away one opportunity to enrich their friends at Gateway Casinos and Entertainment.

We witnessed the recent incorporation of the Mountain Resort Municipality of Jumbo Glacier, a community with an appointed council of three Liberal friends and grizzly bears and mountain goats as residents. Council’s job: make land use and zoning decisions and increase the value of land without being accountable to a single voter.

Canadian Centre for Policy Alternatives analyst Ben Parfitt writing in Sunday’s Province, Sneaky Liberals are planning a B.C. forest giveaway, says the government that will have appeared in the legislature only 19 of the 365 days preceding election 2013, plan to:

introduce a scant two-paragraph bill granting it powers to fundamentally alter the course of forestry in B.C.

…the bill would give the provincial cabinet powers to grant forest companies de facto private control over public forestlands without first having to notify or consult with the public.

Instead of companies enjoying rights to log set volumes of trees on public forestlands, companies would gain dramatically expanded powers to log trees on defined areas that in effect become their own semi-private fiefdoms.

…the provincial cabinet could grant forest companies the rights to roll over numerous volume-based forest licences into area-based Tree Farm Licences. TFLs bestow by far the most secure rights of access to publicly owned trees of any arrangement with the provincial government. The new legislation could massively expand their use, beyond the limited number now issued.

…giving what remains of our forests away is lunacy. A responsible government would delay implementing such contentious legislation and give the public time to digest the implications of such a move. Or the Opposition could signal now that should such a bill pass it would be immediately repealed upon a change in government.

Ben Parfitt, this time writing in The Tyee, comments about the secrecy surrounding new trade in carbon offsets:

In a month or so, BC Auditor General John Doyle is expected to release a report that will be highly critical of the Pacific Carbon Trust or PCT. The Auditor General’s report has been fueled, in part, by hard questions raised about the validity of the offsets.

…Rich Coleman’s decision to remove 70,000 acres of forestland from WFP’s TFLs in January of 2007 illustrates the continued erosion of a system with a scandalous history dating back over half a century. Since the BC Liberals were elected in 2001, forest ministers have selectively dismantled TFLs to create new windfalls for logging corporations friendly to their party. The latest scandal erupted with the announcement that WFP had put 6,300 acres of the former forestlands in the Sooke-Port Renfrew area up for sale. The listing of almost 5 kilometres of waterfront triggered outrage in the community.

In July, John Doyle, the recently appointed Auditor General, also condemned the deal. Using language seldom seen from a government appointee, Doyle concluded the BC government lacked “due regard for the public interest.” Doyle’s scathing report condemned the Ministry’s inadequate due diligence into WFP’s financial status, and highlighted suspicious trading patterns, unusual patterns of political donations and conflicts of interest…

The Vancouver Observer tells a story of efforts to log one of the last stands of ancient Douglas-firs on the coast. Heartwood: Forest Guardians of Cortes Island, by Daniel J. Pierce.

I wish my list were exhaustive. Unfortunately, it is not.