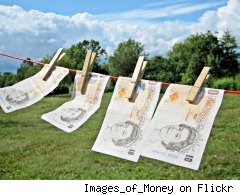 “It’s not clear how big of a problem money laundering is in BC casinos but the government admits it’s not uncommon for people to walk into casinos with suitcases filled with tens of thousands of dollars in small bills.”

You can bet that Global News, CBC News or their corporate media colleagues are not about to do any detailed investigation to find the extent of the problem. However, they will dutifully trumpet memos and reports issued from Victoria.

Money laundering is the subject of an August 24 government press release. BC Liberal minions pulled out the stops to assure us that, having been told by critics about the possibility of money laundering at gaming facilities, they are thinking of “…appointing a task force to report on the types and magnitude of any criminal activity…”

This is an example of governing by press release. The actual report “Anti-Money Laundering Measures at BC Gaming Facilities” was produced by the Solicitor General’s office in February, six months ago. It was not a considered and expert view of illegal cash transactions at casinos, it was an internal political response to heavy criticism in the media following reports the month before of suspicious gamblers entering facilities with massive sums of small denominations cash.

Douglas Scott, Assistant Deputy Minister for Gaming, Solicitor General, Province of BC had this revelation while posing for the cameras at a Victoria news conference:

“The casinos of today are bringing in significantly more revenue than in the past so as a result that now makes them a target for money launderers where they would not have been previously.”

That is a foolish statement because any person with an ear to the ground knows that money laundering has long been a prevalent activity at casinos. It didn’t suddenly begin in the last few years. Besides, gambling revenues are down all over. Recession weary Las Vegas is now the foreclosure capital of the USA and Atlantic City gaming revenue has declined on the monthly year-over-year basis for 35 straight months. BC has not been immune and, according to Sun writer Pete McMartin,

“B.C. Lottery Corporation has paid out more than $400 million in gambling revenues to B.C. casino operators so that they can recoup their capital costs.

Perhaps Scott and his colleagues in Victoria had not been much concerned about money laundering because the BCLC had looked carefully at itself in 2010 and determined,

Katie Derosa at the Times Colonist wrote this,

“Currently, customers are given a cheque for their winnings and cash for the remaining amount of their original buy-in. Casinos will now encourage people to take a cheque that states the amount is for the original buy-in, which creates a paper trail for auditors and prevents people from claiming funds to be gaming wins.

“However, Scott admitted there is nothing to compel gamblers to accept a cheque or use electronic transfer.

“NDP gaming critic Shane Simpson said the review had failed to recommend limits on how much cash a person can take into a casino. For example, a gambler can still take in $400,000 in $20 bills and cash it in for chips, a practice which sounded the alarm for Mounties and sparked the review.”

There you have it fellow citizens. We will fight money laundering by encouraging, but not compelling, crooks to accept a cheque from casinos when they are laundering proceeds of drug crime.