The work of Tom Fletcher is a subject today and the article about agenda-driven journalism is drawing large readership. The Black Press writer offered a defence to one reader today. In it, he claimed I was offering selective quotes. He didn’t saying I was inventing, just selecting. A previous exchange may cast further light on our respective positions. The following was first published in July 2014.

In the article “Unparalleled, indeed,” I quoted from an item written in 2011 by Black Press proselytizer Tom Fletcher. In it, he:

Merv Adey drew Fletcher’s attention to this quote with:

However, his was not a convincing answer since the International Energy Agency and the financial media had been reporting a natural gas glut since 2008, three years before Fletcher tapped out his words.

Besides, oversupply of electricity in the Pacific Northwest is not explained so simply. Respected energy expert Robert McCullough produced a report last winter that paints a more complete picture. It is a picture that suggests the policy that led to $55 billion worth of BC Hydro commitments for high cost private power was true nonsense in a world where electricity has been available from our neighbours for a fraction of what BC pays independent producers.

From Costly to the Core By Nigel Jaquiss at the Inlander.

He found there is regularly so much electricity available in the Bonneville Power Administration network that it can’t sell it all.” In fact, McCullough found, in the past two years, the market has been so oversupplied that Bonneville regularly paid customers to take electricity off its hands.

There are a few reasons why energy prices have fallen so low. Two consecutive rainy years have put plenty of water behind the dams. Energy companies continue rapid development of wind farms, which have become more competitive in the cost of power…

I reminded Fletcher of another of his inaccuracies, one from 2012 that demonstrated his lack of competence to report on provincial energy policy. He wrote:

Natural gas replaced forest products some years ago as B.C.’s top commodity revenue stream, helping to keep the lights on in B.C. schools and hospitals. 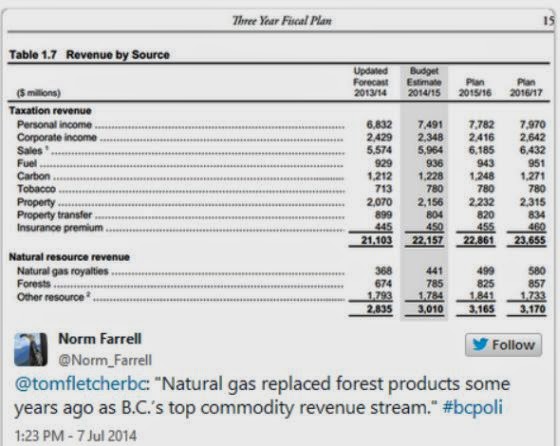 Again demonstrating discomfort with calendars, the response of David Black’s favourite pundit was a non sequitur:

Actually, Tom, it was two years ago you composed that misinformation and you’ve not corrected it since. And, aren’t you one of those writers who likes to claim that BC was in the political and economic dark ages before May 2001? Heck, that was more than ten years ago. By the way, natural gas is not BC’s top commodity revenue stream and here are the gas royalty numbers, drawn from Ministry of Finance documents,

Remember too that oil and gas rights sales had gone softer than a leaking balloon before Fletcher made the claim that gas was keeping the lights on in schools and hospitals. Of course, if Fletcher had his preference, lights would not be needed in public schools, but that’s another story.

I don’t often read Fletcher’s work but I have seen enough to know he is a right-wing ideologue. Apparently, he’s one who doesn’t let fact get in the way of strongly held opinions that he wants to share with readers. I closed the Twitter conversation with this:

Addendum:
In preparing this, I looked at a number of items written by Tom Fletcher. I had forgotten his role in newspaper publisher David Black’s campaign against the Nisga’a Final Agreement, a treaty initialed in 1998 and given legal effect by Parliament in 2000. Black was opposed, strongly opposed, to recognizing aboriginal rights and he ordered his entire newspaper group to give that message to readers. Many people thought that put editors in a position of conflict, perhaps forgetting that Black suggested any editors who were opposed could submit a letter to the editor for consideration.

Fletcher did not have difficulties with an instruction from the boss. In a letter to the Vancouver Sun, he said:

What other editors and I were forbidden to do was to spend the owner’s money and space to counteract his initiative on the treaty by commissioning contrary viewpoints. I have no trouble accepting that.

Of course, this presents a karmic situation. Some years ago, Black and his minions hated the very idea of negotiating treaties with First Nations. Today, they are big supporters of building Northern Gateway and other pipelines to transport fossil fuels across the BC wilderness.

What stands in the way? The consent of First Nations who, in the absence of treaties, have Supreme Court affirmed rights to control development in unceded territories.