Getting what you pay for

The province has presented a credible plan of consistent balanced budgets with little risk that the debt burden will exceed current forecasts.

Sure. I believe that. However, journalists like Matt Taibbi would not. This is from his Rolling Stone article The Last Mystery of the Financial Crisis:

But what about the ratings agencies? Isn’t it true that almost none of the fraud that’s swallowed Wall Street in the past decade could have taken place without companies like Moody’s and Standard & Poor’s rubber-stamping it? Aren’t they guilty, too?

Man, are they ever. And a lot more than even the least generous of us suspected.

…we now know that the nation’s two top ratings companies, Moody’s and S&P, have for many years been shameless tools for the banks, willing to give just about anything a high rating in exchange for cash.

…The Financial Crisis Inquiry Commission published a case study in 2011 of Moody’s in particular and discovered that between 2000 and 2007, the agency gave nearly 45,000 mortgage-backed securities AAA ratings. One year Moody’s doled out AAA ratings to 30 mortgage-backed securities every day, 83 percent of which were ultimately downgraded. “This crisis could not have happened without the rating agencies,” the commission concluded.

..In the old days, ratings agencies lived on subscriptions sold to investors, meaning they were compensated – indirectly, incidentally – by the people buying the financial products.

But over time, that model morphed into the current “issuer pays” model, in which a company like Moody’s or Standard & Poor’s is paid directly by the “issuer” – i.e., the company that is actually making the financial product. …Michigan Sen. Carl Levin, one of the few lawmakers to focus on reforming the ratings agencies after the crash, put it this way: “It’s like one of the parties in court paying the judge’s salary.” 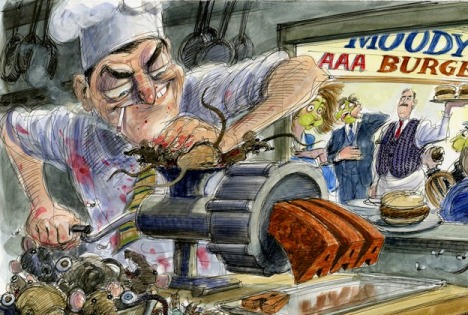