Who does the Government of BC serve? UPDATED

The material below was published June 21, 2014. Since this was written the proponents sold to an Alberta company that is financed by the Ontario Teachers’ Pension Plan, not exactly the mom and pop operations that were first described by Gordon Campbell’s IPP-promoting minions. We don’t know how much BC Hydro will be paying for the unneeded power but we know this intermittent supply is useless for the intended gas liquefaction plant in nearby Howe Sound. However, we do know some connected individuals did well on the flip. There is a pattern repeated with independent power projects in BC: politically connected dealmakers do deals, then disappear, cash in hand.

I believe the numerous Narrows Inlet IPPs demonstrate the worst of BC Liberal policies for energy. This unneeded, intermittent supply is destructive to the wilderness, rewarding to a few people and the public would have been better served had BC Hydro written them cheques worth millions to simply go away without touching the lands.

As a reminder of the absent need for more costly power from Narrows Inlet, I repeat these critical charts: 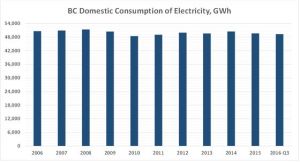 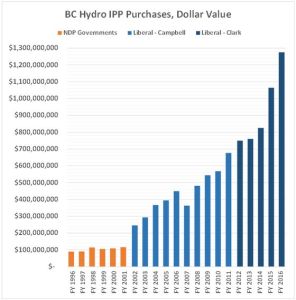 – – – – – – – – – – – – –
I wrote previously about Narrows Inlet, a wilderness area 60 kilometres by air from Vancouver. I repeat Joan and Soren Bech’s submission to the Environmental Assessment Office because it is articulate and it relates to a major theme at this blog. The theme is a rhetorical question, “Who does the Government of British Columbia serve, business interests or present and future citizens?”

Here is a map link to the area and a link to Northern Insight articles about Narrows Inlet.

March 2015, BC Hydro had contracted with independent power producers for $56,206,000,000 worth of power. Do we need it? Perhaps, so that we can provide equivalent amounts to mining companies and LNG operators at half the cost.