Heart of our economy gets ignored

When government is captured by people pursuing fortunes in real estate development and resource exploitation, the interests of all others become secondary. When the bubble bursts, when phantom markets collapse, what remains?

Small and medium‑sized enterprises employ about 2/3 of Canadians employed in manufacturing. Yet government programs typically aim benefits at large multinational corporations. An example in British Columbia is the arrangement allowing large, mostly foreign owned, mining companies to defer payments for electricity for up to two years. Additionally, Government directed BC Hydro to spend about a billion dollars on transmission lines that primarily powers the Red Chris open pit mine of Imperial Metals, which is controlled by Christy Clark’s favourite fundraiser, Murray Edwards. Substantial expenditures are also being made in the Northeast gas fields, even though government revenue from that resource has turned fugitive.

Not only must taxpayers fund huge capital expenditures for infrastructure to benefit large corporations, BC Hydro is required to sell them power at preferred rates, even though the average independent power producer (BC Hydro quarterly report Dec/15) is paid 68% more per GWh. The more power consumed by mining companies, the higher is the subsidy they receive. However, it is not just residential consumers who pay for subsidies to heavy industry; it is also commercial businesses and small and medium-sized manufacturers. Those customers pay almost double the unit price that mining companies pay and require little marginal spending on distribution lines. 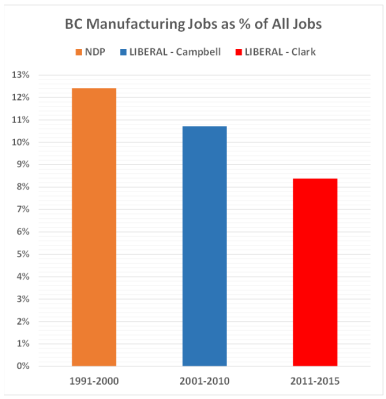 Mining, quarrying, and oil and gas extraction provide 1.4% of BC’s jobs but a much larger percentage of funding to #BCLIberals. #bcpoli