Our ignorance serves a purpose

With only months until the 2017 BC election, Liberal deceivers are emerging from the lairs. Bob Mackin, the most feared journalist in BC, has a few of the details in his report at thebreaker.news.

Bob Mackin mentions John Winter, a name that will be familiar to regular readers of In-Sights. Previous mentions here are revealed by our search facility.

One article is from 2014 and it is worth repeating since it demonstrates that the handiest tool in the Liberal tool box is the lie. I repeat the piece:

Taxes, after all, are dues that we pay for the privileges of membership in an organized society.”

.”
If you’re older than 30, you will remember the nineties. Hard times, said Milton Friedman, were produced by government mismanagement rather than by any inherent instability of private economy.

In most corporate media accounts, mismanagement is what occurred in BC for the decade that ended May 2001. Business writer John Greenwood recounted the disaster in one 2005 example from the National Post, a newspaper that knows much about mismanagement:

…By the late 1990s, mining — once an engine of the economy — had shrunk to a point were companies had virtually given up on looking for new mines in the province.

By the time the Liberals came to office, the economy was in tatters.

“There was negative economic growth — mining had effectively been killed off,” recalled John Winter, president of the British Columbia Chamber of Commerce.

…without the changes put in place by the government the current economic boom would never have happened. The forest industry was the first to catch fire. …meanwhile, the battered mining sector shrugged off its malaise…”

Mineral-rich British Columbia has been one of the biggest beneficiaries…

Coal producers — who account for the largest part of the industry — are doing especially well. Fording Canadian Coal Partnership [now Teck Resources], one of North America’s biggest players, is enjoying a banner year, limited only by the capacity of the railways to move production from its mines in southeast British Columbia to the waiting bulk carriers at the Port of Vancouver…

After years of laying off workers, mining companies are so busy they can’t find enough workers…

If we examine statistics issued by Natural Resources Canada, a different picture emerges than the one John Greenwood painted. So different that one must question Postmedia’s motives for publishing this pro-government puffery shortly before BC’s 2005 election.

Despite the journalist’s concern for railroad capacity, coal shipments were less in 2005 than 2004 and less even than in 1997.

It’s no surprise National Post was campaigning for the BC Liberals and published a dishonest piece, but I am surprised, perhaps naively, that no major media operation bothered, then or after, to make a critical examination of BC Liberal claims about the mining business. If any did, I could not locate them in hours of searching newspaper archives. In fact, I found numerous articles similar to the one referenced, usually quoting business spokespersons.

I assembled natural resource data because I judged something seriously wrong with resource revenues recorded by government. Commodity prices soared dramatically yet the public revenues dropped. Higher prices typically encourage more production and one expects greater mine profitability, particularly when between 1999 and 2005, prices of the most significant commodities, coal and copper, rose 279% and 190% respectively.

My examination of production and price statistics resulted in a concern about government’s ability to collect all of the taxes it is due. Under BC Liberals, downsizing and “red-tape” elimination has resulted in reliance on self-reporting of production volumes and revenue and expense reporting. Particularly in precious metals production, government has no way of accurately knowing what is due.

Strangely, they’re ok with that. 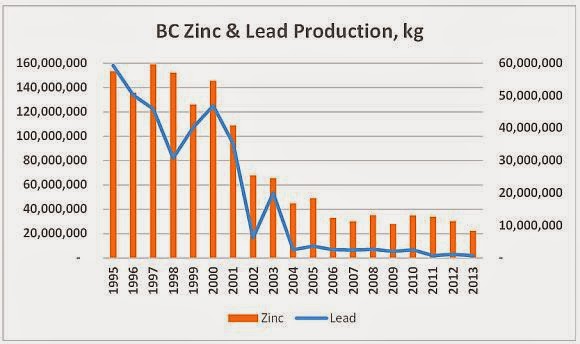 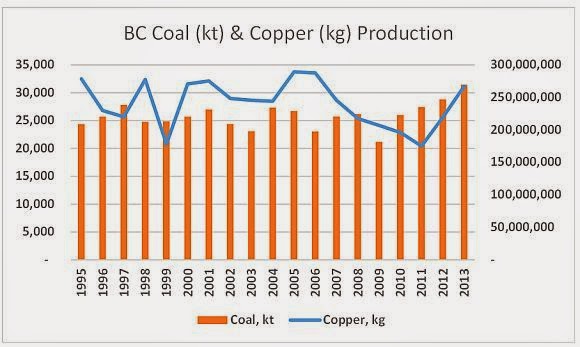 Courtesy of the Ministry of Energy and Mines and Responsible for Core Review and Graft and Corruption,

The value graph shows steady increase but a chart of kilotonnes produced, from numbers provided by Natural Resources Canada, shows fairly steady quantities. Despite growth in the province’s economy of more than 20%, three of the last five years are less than the 20 year average. 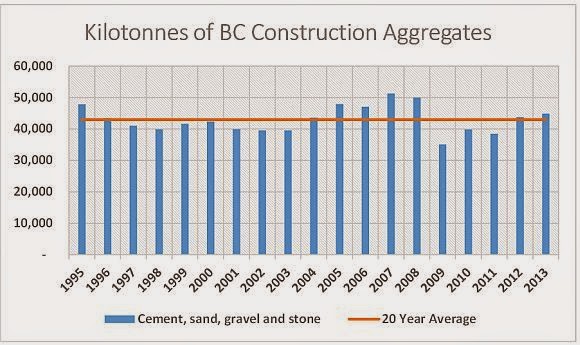