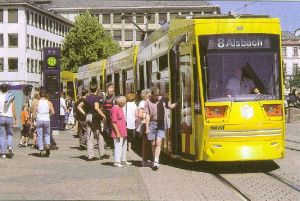 Malcolm Johnston is a near perfect example of a citizen activist (sorry Keith Baldrey) who wants to see public money spent with maximum efficiency. He is convinced that legitimate transit planners are pushed aside by spin doctors, consultants and other lobbyists working for vested interests, like the discredited briber, SNC-Lavalin, a BC Liberal favourite.

Mr. Johnston recently forwarded this letter to the Surrey Leader, but, being a Black Press publication, who knows if it will be published as written or pubished at all. Mr. Johnston gave permission for this to be repeated at In-Sights:

When I hear LRT being called a “choo-choo”, I instantly know that who ever utters the phrase is ignorant.

Modern light rail is the backbone of modern public transit and can affordably move between 2,000 to over 20,000 persons per hour per direction. Modern light rail bridges the gap from what buses can economically carry and that of a metro.

The flexibility of modern LRT has made other expensive proprietary transit systems, like our SkyTrain light metro, obsolete.

ALRT was conceived just to bridge the gap from what old streetcars could carry and that of a metro. It failed and failed badly, as modern LRT outperformed ALRT by being faster, safer, cheaper and carry more customers. Despite a complete redesign by the patent owners of the proprietary ALRT/ART light metro, Bombardier Inc. and SNC Lavalin, only seven such systems have been built in 40 years and not one was allowed to compete against light rail.

Quotes from  American transit expert, Gerald Fox’s review of the Evergreen line are worth repeating.

I found several instances where the analysis had made assumptions that were inaccurate, or had been manipulated to make the case for SkyTrain. If the underlying assumptions are inaccurate, the conclusions may be so too.

It is interesting how TransLink has used this cunning method of manipulating analysis to justify SkyTrain in corridor after corridor, and has thus succeeded in keeping its proprietary rail system expanding. In the US, all new transit projects that seek federal support are now subjected to scrutiny by a panel of transit peers, selected and monitored by the federal government, to ensure that projects are analyzed honestly, and the taxpayers’ interests are protected. No SkyTrain project has ever passed this scrutiny in the US.

With over 600 transit systems in the light rail family in operation around the world today, calling LRT a choo-choo, is more than juvenile.

Rail for the Valley