July 10, Global TV National 5:30 PDT reported on that day’s Toronto Day of Action for Civil Liberties. Rights advocates called for a complete and independent public inquiry into the police response to G20 demonstrations and Global was unimpressed. They claimed 5,000 protesters had been expected – without saying by whom  – and only 2,000 showed up. The reporter said this was evidence that civil rights advocates were losing public support.

Global showed incidents of G20 vandalism intended to inform or outrage casual viewers and help them to the conclusion provided by the Global reporter.

I guess they were lacking in sufficiently outrageous footage of Toronto G20 vandals so they cut in a video of Vancouver black-bloc crazies knocking over two newspaper street boxes during the 2010 Olympics.

Gee, did that fit the Wikipedia definition of yellow journalism:

In the yellow journalism era of the 19th century, many newspapers in the United States relied on sensational stories that were meant to anger or excite the public, rather than to inform 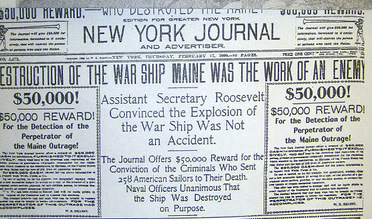 We saw the media’s ability to estimate crowd sizes when Corus Radio reported that “hundreds” of supporters participated in Andrea Morton’s rally at the Legislature and Canwest counted close to a thousand. Meanwhile, photographs indicated between three and five thousand participants.

Global went beyond that in “reporting” on today’s Toronto event, admitting that while quite a few people participated, it should have been many more. So, apparently they counted not only people who showed up, they counted people who didn’t show up but should have.

Not addressed was the real issue about which the citizens were complaining on Toronto’s streets today. While main stream media dabbled, a lowly blog, Rabble.ca, was left to pose the relevant question:

20,000 police and security officials and a $1 billion security budget were not enough to stop 75-100 black block anarchists from smashing windows and torching police cars during a 1.5 hour rampage. The Black Block were able to rampage through the street for 24 blocks until they reached the ‘official protest zone’ where they quickly changed clothes dispersed through the crowd of peaceful protesters and then left the site.

The police were fully aware of the rampage and watched the black block from a distance at a number of locations. It wasn’t until they had dispersed into a crowd of peaceful protesters who thought that they were in a sanctioned area that the police took action beating innocent people with batons and spraying them with pepper spray.

Why was this allowed to happen? Police abandoned police cars at Bay and King when they didn’t need to, why?