Bear story part two – humans living in harmony, animals not so much

A few days ago, I wrote about the visit of an Uninvited Caller. Because of dedicated volunteers and modern conservation efforts, most outcomes of human/bear encounters end safely for both animals and people.

Certainly, it was startling to confront an adult bear inside my home but I didn’t feel at risk. Black bears are naturally shy and become nuisances to people only through our collective carelessness. Usually, they are easily scared away. Rather few injuries or fatalities associate with human contact of these animals.

In this piece, I write about black bears (ursus americanus) not the grizzlies (ursus arctos horribilis) which are more aggressive if people encroach on their space but they don’t live in populated areas of southwest BC.

Years ago, after human/bear contact, the response of authorities was often harsh. My family moved into the Seymour River valley in the seventies. Few of us gave much thought to bear risks beyond expecting the wildlife service to show up promptly after a sighting, bringing guns or at least a containment trap. I recall returning to our quiet neighbourhood one day to see rifle toting RCMP and wildlife officers walking by my driveway. Minutes before, a black bear had been fatally shot in the yard next door to ours.

Most bear efforts years ago were aimed at relocation but repeat visitors, if they returned from far afield, were given no more chances to reform. Relocation is still an important tool but today’s strategy focuses on changing human behaviour so that bears can be left alone.

A couple of decades ago, North Vancouver ran a giant garbage landfill site near Lynn Creek at the edge of the North Shore forest. That was a smörgåsbord, thankfully now closed, for hungry wild animals and bears were a common sight nearby.  If local animals wandered elsewhere, they quickly searched for exposed garbage and it was readily found before people learned to exercise diligent care.

I once used a plastic waste barrel with a snap-lock top but the closure was easily defeated. I employed elastic bungee cords to secure the lid, but learned that sanitation workers would not collect our garbage because, “They risked injury and experienced delay when removing the bungee cords.“

The municipal people were adamant. They didn’t approve of bear-proof containers because efficiency of the refuse collection system had priority. I don’t know how much that has changed, if any. [2020 Note: North Vancouver District residents now use containers that have cable locks, which must be removed when garbage is put on the street early in the day of collection.] 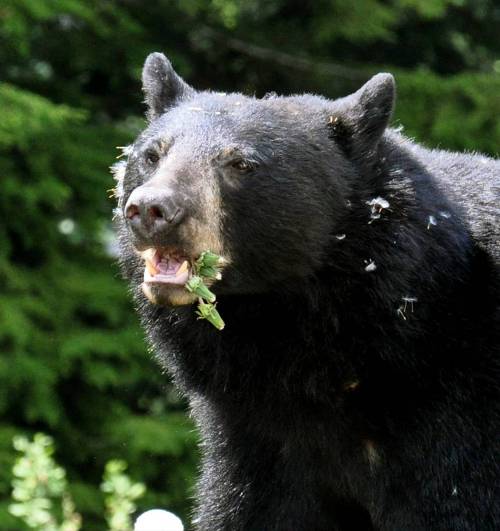 However, citizens grew ever more uncomfortable with executing bears whose crime was a taste for food carelessly discarded by humans.

Organizations such as the North Shore Black Bear Society taught people to live in harmony with bears.  The Liberal government decimated the wildlife service staff so there were few responders able to deal with rogue bears and, although an unintended consequence, that meant that animals were usually allowed to amble back into the forest without challenge.

After chasing the bear out of our house, I called 911 and asked if the RCMP could drive through the neighbourhood and warn any children playing outside to exercise caution or return home. They did that quite promptly which was pleasing. They told me to call the Victoria toll free number to advise the answering machine about the incident.

The next day, a wildlife officer called and we talked a little. He said they had a number of other reports so would probably set up a trap in the area and try to relocate the troublesome bear.

The animals, it seems, have smelling capability equal to or better than bloodhound dogs. The conservation guy advised me that, with excellent memories, once-fed bears return for more so extra caution is needed when we deal with food, garbage and other potential attractions.

A day later, Bear Aware Specialist Christine Miller telephoned to discuss the event and offered to help us or anyone nearby if information about animal contact was needed.

Obviously, no harm resulted and I was supposed to take that bag of garbage out of the kitchen anyway. At least, this gives us a fun story to relate. I pass along the information here mostly to recognize and applaud the efforts of people like Christine Miller who put a lot of practical effort into their very simple but noble cause. It is best  expressed by their phrase, “Living in Harmony with Bears.”