Vancouver Sun shames itself and journalism

The Vancouver Sun is actively campaigning for BC Liberals. That may not be new but this week they plumbed new depths in presenting false news to readers. As recipient of countless millions of public advertising dollars from the province, should we expect anything else?  Let us examine a few of the recent efforts to serve the cause of Gordon Campbell’s party.

Sun editorialists, supervised by former Fraser Institute apparatchik Fazil Mihlar, distort the events and outcome of the aborted trial. They claim that the case dragged on because of “legal wrangling” but ignore the fact that the delays were over disclosure of  documents and communications that the BC Liberal government fought  every step of the way. The government even destroyed many documents despite knowledge those very items had been requested by defense lawyers and should have been preserved for judicial review.

Of course, with the trial ended after only two prosecution witnesses – both made ridiculous by defense questioning – and with post-trial plans to obliterate all documentary evidence, including wiretaps of the former Liberal Finance Minister, the newspaper makes an assertion that can never be tested:

“[There were] years of speculation that the sale of BC Rail to CN was somehow tainted. It was not. There was no evidence of any wrongdoing on part of the government or CN in the thousands of documents examined as part of this case.”

What is the authority for that claim?

Fazil Mihlar and colleagues have not seen those thousands of documents. The defense lawyers demonstrated during testimony of Campbell aide Martyn Brown and Brian Kenning the power of their potential evidence. Despite having had seven years to negotiate an earlier capitulation, the Liberals’ prosecutor wanted no more. He surrendered because he was unable to limit questioning of his witnesses. The Vancouver Sun sees that as vindication of BC Liberals. It was not.

Columnist Ian Mulgrew, keen for readers to believe that “wild conspiracy theories” (the ones they’ve refused to write about) are now proven untrue, wrote this:

“The Liberals were going to be cleared, according to what went down in court. This unexpected volte-face is an embarrassment for the two formerly high-flying politicos and all those who accepted their original finger-pointing version of events. For six years the public has been kept in the dark and subjected to the most provocative and unsubstantiated rumours imaginable, primarily that the Liberals used sleight of hand to flip a $1-billion-plus public asset to their corporate friends at CN Rail for a bargain-basement price.

. . . Attorney-General Mike de Jong . . . said the ministry wasn’t going after Basi and Virk for their legal costs because “ there’s nothing left to go after.”

Ok, Ian Mulgrew, do you know that for a fact or are you just a stenographer here?  Our intrepid VanSun reporter needs to read a real newspaper. That would be The Globe and Mail, where Robert Matas has a  contrary story.

“At first glance, it appears Mr. Basi is a man of property with significant resources to contribute to at least a sizeable portion of the cost of his legal fees.

Mr. Basi, his wife Inderjit and mother Sukhbir had four houses in Victoria in 2003 that were valued at $1.2-million, according to media reports after the raid on the legislature.

It’s not clear what happened to Mr. Basi’s real estate holdings over the years while the court case dragged on. Mr. Basi was not prepared Tuesday to clarify anything. He referred a request for an interview to his lawyer, Michael Bolton, but Mr. Bolton then said he was not prepared to comment on the matter.”

It seems that when charged, Mr. Basi had considerable resources. We also learned today that the BC Government held a mortgage against a Basi property with a value approaching $1 million. Now, for those who might wonder, property transfers made to avoid liability for debts are routinely challenged and reversed by government agencies. Canada Revenue Agency does it regularly. People can’t avoid a debt by making sham transfers of titles to friends and relatives.

Craig McInnes, another helper from theVanSun’s editorial board, joins the effort to claim that, with the trial ended, all the associated accusations (again, the ones they won’t write about) are proved to belong to loony theorists:

Conspiracy buffs are agog at the notion that Attorney-General Mike de Jong’s decision last week to forgive $6 million in legal fees in the BC Rail corruption trial was made to end the trial and avoid any more embarrassing testimony.

Notice how the prevaricators haven’t kept their stories straight?  Negotiation of the legal fee forgiveness has been credited to Mike de Jong, David Loukedlis, Graham Whitmarsh and Bill Berardino and the prosecutor’s staff. The agreement didn’t include a confidentiality clause except for the clause where everyone agreed to keep the agreement confidential and that has, or has not, been waived. There was no political involvement in negotiation except that both the Deputy Ministers who may or may not have been involved are appointed by and report to Premier Campbell’s office. In other words, they are political appointees, not civil servants. Similarly, Special Prosecutor Berardino was a carefully chosen independent, except that he is a former partner of key Liberals.

Now, one more question should be raised. Will Basi and Virk pay income tax on the $6 million paid on their behalf by their former employer?  Or, has that been relieved, to be picked up by taxpayers as well. My bet is on the latter and that would amount to another few million down the drain. 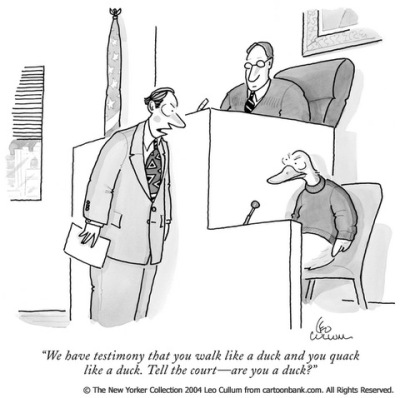 I think our friends at the Sun need a copy of this classic drawing from the New Yorker.