Alibi for ignorance: All I know is what I read in the newspapers

As protests targeting Hosni Mubarak`s regime mounted, broadcaster Bill Good said it was wrong for bloggers to babble about political corruption in British Columbia because wrongdoing in Egypt was so much worse. In fact, political power in British Columbia is also focused in one man’s office, with his unelected helpers exercising authority over the entire operations of government, while elected legislators hold only nominal power. As proof, the BC Legislature was called into session this week after 256 days, with a plan to sit for only four days.

As in Mubarak’s Egypt, Gordon Campbell’s government has worked steadily to transfer public wealth and future income into the hands of a favored few friends. Taxpayers have been saddled with debt at unprecedented speed; speed that would delight any middle eastern despot.

Mubarak was President of Egypt for 30 years, Vice-President for six years and head of the air force for six more before then. His present family fortune is estimated at $40bn-70bn, which means between one and two billion a year were diverted from Egyptian people. And, that must be shared with Mubarak’s two sons, Gamal and Alaa, who have the costly tastes of young jet-set billionaires.

If we asked Mr. and Ms. Average Citizen to explain British Columbia`s financial position, I expect they would credit the current government with a record of sound fiscal management. After all, that is what the Liberals promised before they were elected and they have repeated the phrase constantly. It is still popular today because the promise of sound fiscal management is made by every Liberal leadership candidate. And repeated by friendly media types like Bill Good.

Is the claim true? No. 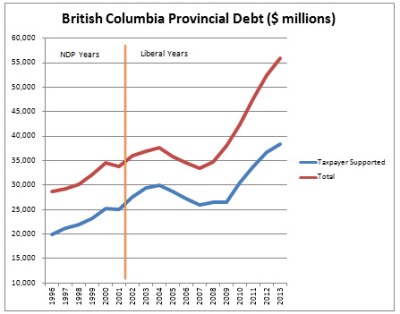 Even worse, BC Liberals hide billions more in quasi debt, the detail of which is hidden from public view. For example, notes to BC Hydro`s 2008 financial statements of BC Hydro show minimum future obligations to purchase energy from private power producers at almost $28 billion. The amount, which is growing, is not included as a debt liability on the provincial balance sheet. 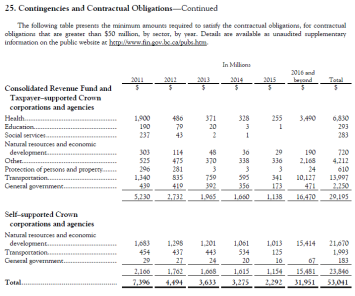 The BC Liberals have done much off-balance sheet financing, from road and bridges to hospitals. They pretend future payment obligations are not debt and go about the province extolling their expertise in sound fiscal management. In fact, even though direct debt on the financial statements has grown, so too have contractual obligations, to $53 billion in 2010.

This occurs without criticism by the news media. Nor are Liberal assertions even mildly challenged by major Victoria based pundits. Will McMartin, a master of detail, has written about this for years in The Tyee,

The paucity of comment is in stark contrast to the 1990s when the NDP was in government. Then, nearly every rise in the province’s debt sparked vitriolic diatribes by newspaper editorialists, open-line radio hosts, the business community, as well as the former legislative opposition, the B.C. Liberals.

This go-round nary a peep on the debt has emanated from the legislative press gallery. Newspaper editorial-writers have turned elsewhere to vent their spleens. Phone boards at talk-radio stations have been silent on the issue. Captains of industry are mute.