Behind the screen in the wizard’s chamber, we have . . . 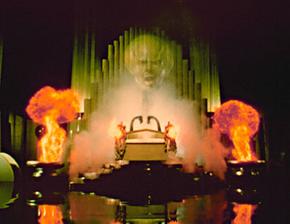 There is unusually heavy traffic here for a Saturday evening so I assume readers are looking for a reaction to today’s anointment of The Progressive Group’s selection as Premier.

I was already suspicious of the voting scheme and became convinced the result was preordained when Nova Scotia-based Intelivote Systems Inc. let it be known that a number of control and audit checks available in their system were disabled at the choice of party officials. Further, confusion over thousands of voter PINs created a scramble to issue last minute voting IDs to who knows whom. Votes once recorded could not be examined.

Was there a back room with loyal soldiers armed with PINs beavering away, creating the result desired? Strange it is that the province’s highest political official is selected without public oversight. Even the newest council member of Silverton BC (pop. 185) is elected in a process with scrutineers and other long established controls. Votes are not accepted by Internet. Votes are not accepted by telephone. Ballots can be counted afterward and voter signatures examined.

The process selecting Christy Clark Premier is only legitimate if you trust BC Liberals. Have they ever lied before?

Mind you, the Liberals could have selected any of the four candidates and nothing would change. Gordon Campbell was no more or less corrupt than his close associates. The faces may change but little else will alter because the same people stand behind the curtain in the Wizard’s chamber.

“If voting changed anything, they’d make it illegal.”

This from an earlier article at Northern Insights:

Ms. Clark, not to be outdone by Falcon’s ante of Ryan Beedie, a Fraser Institute director, wagered her own director of the think tank that inspires BC Liberal policies. Gwyn Morgan, also a director of the Manning Centre, is the former president and CEO of energy company EnCana Corp., one of North America’s largest natural gas producers. [Morgan is now Chairman of the Board of SNC-Lavalin.] He is but one among a team of rich folks backing Clark, including Patrick Kinsella, consultant and advisor to both buyer and seller of BC Rail. It is safe to assume that Kinsella is not helping Clark to gain access for himself to the Liberal Party’s backroom. He is already the proprietor.