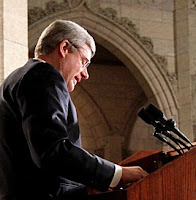 “When a plane of ours arrives, obviously we first board Canadians. If we still have room, we board others.”

On Thursday, a plane chartered by Ottawa to retrieve Canadians was stranded in Italy due to insurance problems. A second chartered plane landed in Tripoli but failed to pick up anyone and flew out empty. Even as another aircraft was dispatched from Jordan, Foreign Affairs was urging Canadians through its website to stay away from Tripoli’s airport.

When asked Friday by the CBC how many Canadian citizens they had evacuated a Foreign Affairs spokesperson said,

“The number currently stands at zero.”

Murphy’s Law:  Anything that can possibly go wrong, does.
.