Wealthcare, a story of unrestrained greed 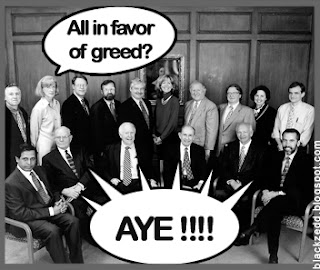 US based auto maker Ford Motor Company has awarded $56.5 million in stock to Alan Mulally and $42.4 million in shares to its executive chairman William Clay Ford Jr. Here is Ford’s profit record since Mulally became CEO in 2006, replacing Ford Jr.

Under Mulally, three years of losses totaling over $30 billion followed by $9 billion in profits in two years. The profits of 2009 and 2010 included financial recoveries from assets previously written down so the apparent turnaround is more cosmetic than real.

Net operating result for five years: $20.9 billion accumulated losses, revenues down more than 20%, total assets down 40% ($100 billion). Imagine the bonuses if they had done well.

“It is obscene for any individual executive to take home many tens of millions of dollars in personal compensation as a result of the performance of an entire large corporation. It is this kind of individualistic greed and excess that contributed to the recent bubble collapse in the U.S. and the resulting global recession. Have we learned nothing from that experience?

“The payout is particularly galling because there are already about 1,300 Ford workers on layoff in Canada and Ford will close its St. Thomas, Ont., facility later this year.”

H/T on this story to a great old friend.