Is it still bigger, better and largely empty? – updated

Global TV is reporting that Vancouver tourism is down slightly in 2011 but says,

“It might have been much worse if not for the new convention center.”

Is that good news? It might not be because if the opposite were true, Global wouldn’t tell you anyway.

Let’s look at the Convention Centre bookings for 2012 as listed on the facility website August 26. Then, we should consider if the billion dollar addition (West Building) to existing facilities (East Building) really made sense.

Quite an economic engine for the city, is it not. A few minor international events and one national gathering in two immense and costly structures. At this point, over 300 days of 2012 are not booked in both Western and Eastern buildings. Strange, because a tenet of convention organizing is book early. Most major events are scheduled years, not months, in advance.

We have indications of a giant failure in the Vancouver Convention Centre yet Pavco’s CEO and the Convention General Manager each earned six-figure bonuses in fiscal 2011. 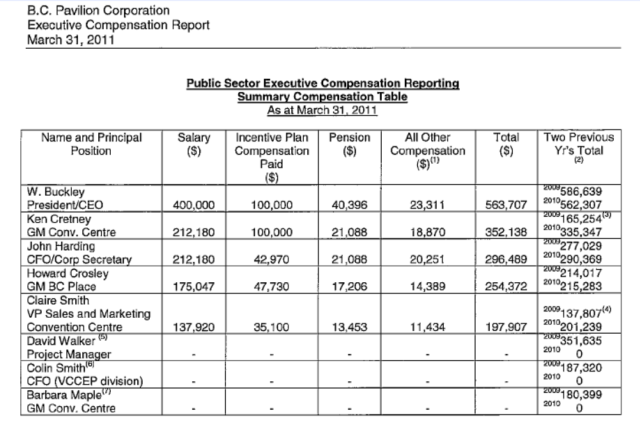