The one-percenters and their agents in government remain deaf. 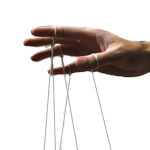 “WASHINGTON — Even as protests over its political influence grow louder, Wall Street is one of the leading sources of money so far in the 2012 race for the White House.

“Not surprisingly, the biggest beneficiary has been Republican hopeful Mitt Romney, according to a new analysis by the Center for Responsive Politics, a nonpartisan campaign-finance watchdog group.

“A former chief executive of a successful private investment firm, Romney has attracted $7.5 million from the financial community, the center found. That’s nearly twice as much as President Barack Obama has received from it, and almost a quarter of the $32 million that Romney’s campaign has taken in overall.

“Romney brings with him a lot of connections in the business world and Wall Street community and those connections are paying dividends as he runs for president,” said Michael Beckel, a spokesman for the center. “We noticed that, so far, the biggest financial institutions have all preferred Mitt Romney.”

“Indeed, the former Massachusetts governor is the top recipient of campaign cash from employees of the five biggest Wall Street banks. Goldman Sachs gave the most — $352,200…”