Time for BC’s media to admit its conflicts

CBC finally responds publicly, but not completely. Read for yourselves and add your comments. CBC Editor in Chief responds to Ombudsman decision. Be aware though, they do not approve intemperate comments, even insightful ones. They are wary of reader comments that provide effective criticism.

When the media notes conflicts of interest in the business of politicians and community leaders, the reporting is immediate and relentless. Ask Glen Clark or Bill Vander Zalm. However, when conflicts involve fellow journalists, disinterest and silence is usual. So we have people presenting news that affects industries paying them remuneration and immediate family members of reporters working in partisan positions paid for by the government the journalists cover. Colleagues tell the audience nothing. What might be an example of public conflict elsewhere is private business when media members are involved. 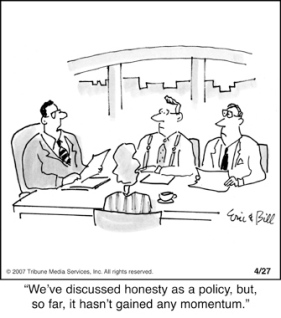 Be assured, Stephen Smart is not alone in being conflicted. In the words of one insider, his is not the most egregious situation. It is time for at least the CBC, Vancouver Sun, Global TV, Corus Radio and Times Colonist to make proactive disclosure of any situation that a reasonable person might recognize as a direct or indirect conflict of interest in current or recent political reporting. Actions should not depend on persuasion or coercion from independent journalists.

That statement would have been unnecessary a few years ago.

Despite a heads-in-the-sand approach to the morass involving its Legislative Bureau Chief, CBC has not always responded meekly when conflict of interest is demonstrated. A number of years ago, the broadcaster fired its Quebec City radio correspondent after accusing him of asking questions of political leaders for the benefit of a third party. The reporter said his work was not affected by the relationship; CBC said the principle of independence could not be compromised. There was at least one difference though; Andre Salwyn was not the son of an influential Supreme Court Judge.

In a more recent case, Maclean’s suggested The Globe and Mail had an undisclosed conflict of interest when the newspaper gave top space — front page above the fold — to a global university ranking in which Thomson Reuters had a partnership interest. Macleans noted:

“It does not reveal that Thomson Reuters is the most high-profile asset of the Woodbridge Company Ltd., which had just announced a deal to buy the newspaper.

“…the fact that the Globe didn’t declare a potential conflict of interest when mentioning Thomson Reuters in the ranking story struck some as curious.”

David Swick, who teaches journalism ethics at the University of King’s College in Halifax said it was a perceived conflict of interest. Swick pointed to a 2008 Léger Marketing poll showing that only 41 per cent of Canadians trust journalists. Which makes transparency, he says, all the more important.

In the nineties, Southam National Columnist Catherine Ford, wrote about the conflict of interest dilemmas of couples in the public eye:

“The Kleins, like the Stevens, either forgot or chose to ignore Rule No. 1 of politics and high places: Caesar’s wife must be above suspicion.

“[Noreen] Stevens, the wife of disgraced federal cabinet minister Sinclair Stevens, told a judicial inquiry into conflict-of-interest charges against her husband that there was no pillow talk in the Stevens’ household.

“…Canadians took her comments to be the sad attempt of a wife to protect her husband, as if wives have a special dispensation to profess they know nothing, see nothing and say nothing.

“…The Kleins are in a similar dilemma. …The public has to decide whether Colleen Klein is being manipulated by her husband and his cronies, or is ignorant that conflict-of-interest includes her, too. It’s a no-win situation, and the premier should have known that…”

Writers like Vaughn Palmer and Keith Baldrey wrote about spouses troubled by conflicts of interest during the time in BC history when Bill and Lillian Vander Zalm tried unsuccessfully to keep personal and government business separate.

In 2004, The San Francisco Chronicle removed its lead City Hall reporter and photographer from covering certain stories after concluding that there was potential for the appearance of a conflict of interest. Executive editor Phil Bronstein wrote in an internal memo:

“Chronicle journalists directly and personally involved in a major news story — one in whose outcome they also have a personal stake — should not also cover that story, The issue is the integrity and credibility of the paper as well as conflict and perception of conflict.”

Would we lie to you? by Anthony Wilson-Smith was published by Maclean’s in 2000. He wrote that,

“…bias isn’t always overt. Any experienced reporter knows how to slip in “weasel” words or phrases that paint a subject in a certain way without saying so directly. If you are profiling a CEO and want to make nice, you might describe him physically as “a bear of a man whose imposing stature reflects the manner in which he dominates a room.” Or if you think he is a jerk, you might focus on the manner in which “his stomach protrudes over his belt, and his excess weight causes him to perspire profusely.” Either way, same guy.

“…The fact that some reporters and editors twist the news to advance themselves isn’t new: there are now just more opportunities than ever. The truth isn’t pretty–and it isn’t, sad to say, always the way it’s presented in the media.”