Many working stiffs watch a third and more of every extra dollar earned disappear as income tax. Then, we’re hammered again with user fees and consumption taxes when we spend shrunken dollars to buy goods at prices far higher than what our neighbours pay for the same items south of the border.

A prime reason that ordinary folks feel financial pain is that multinational corporations and global capitalist jet setters don’t pay much in the way of tax. Analysts predict Apple could earn over $45 billion this fiscal year, which would be an American business record. Despite incredible wealth, across the world, Apple will pay a minor fraction of its profits in taxes.

“…Setting up an office in Reno is just one of many legal methods Apple uses to reduce its worldwide tax bill by billions of dollars each year. As it has in Nevada, Apple has created subsidiaries in low-tax places like Ireland, the Netherlands, Luxembourg and the British Virgin Islands — some little more than a letterbox or an anonymous office — that help cut the taxes it pays around the world…

“…Apple was a pioneer of an accounting technique known as the “Double Irish With a Dutch Sandwich,” which reduces taxes by routing profits through Irish subsidiaries and the Netherlands and then to the Caribbean. Today, that tactic is used by hundreds of other corporations — some of which directly imitated Apple’s methods, say accountants at those companies…”

Of course, businesses typically do not pay consumption taxes like Canada’s HST, so the total tax bills of large corporations may be a tiny fraction of each sales dollar, particularly if business is conducted across national borders. 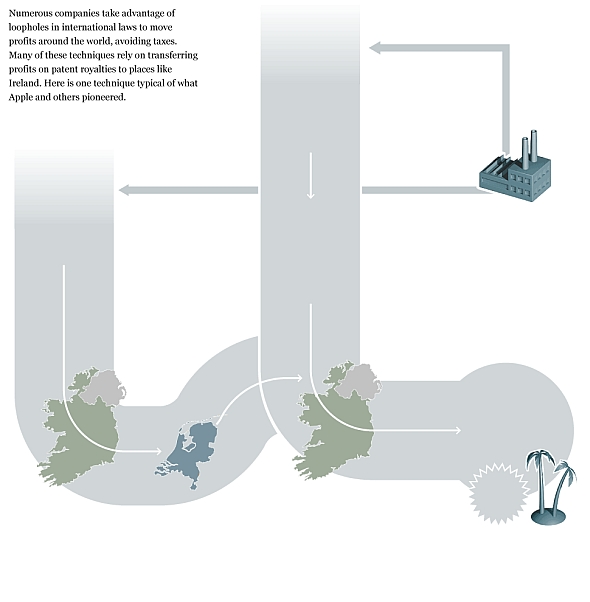 Of course, among the one percenters, tax avoidance is a long established habit. The Guardian revealed this month that British Prime Minister David Cameron’s father set up offshore investment funds which explicitly boasted of their ability to remain outside UK tax jurisdiction.

“…the dramatic growth of such offshore financial activity has raised concerns that national tax authorities are struggling to pin down the world’s super-rich.

“Ian Cameron took advantage of a new climate of investment after all capital controls were abolished in 1979, making it legal to take any sum of money out of the country without it being taxed or controlled by the UK government.

“Not long after the change, brought in by Margaret Thatcher after her first month in power, Ian Cameron began setting up and directing investment funds in tax havens around the world…”

“One of Britain’s most prominent religious figures, Cardinal Keith O’Brien, has attacked David Cameron for immoral behaviour and for favouring rich City financiers ahead of those struggling on lower incomes.

“Speaking to the BBC, O’Brien, Scotland’s most senior Roman Catholic authority, said: “The poor have suffered tremendously from the financial disasters of recent years and nothing, really, has been done by the very rich people to help them.

“I am saying to the prime minister, look, don’t just protect your very rich colleagues in the financial industry, consider the moral obligation to help the poor of our country.”

Harold Meyerson, an American journalist and opinion columnist, was named one of “the most influential commentators in the nation” by the Atlantic Monthly in 2009.

Editor-at-large of The American Prospect, he wrote Business is Booming in which he argues that leading American corporations have found a way to thrive even if the American economy doesn’t recover. Meyerson warns, “This is very, very bad news.”

“When he was CEO of General Electric, in 1998, Jack Welch pithily summarized his vision for corporate America: “Ideally, you’d have every plant you own on a barge to move with currencies and changes in the economy.”

“Since then, corporations have discovered that they don’t need barges in order to unmoor themselves from the American economy. As corporate profits skyrocket, even as the economy remains stalled in a deep recession, Americans confront a grim new reality: Our corporations don’t need us anymore. Half their revenues come from abroad. Their products, increasingly, come from abroad as well…” continue reading