Spread this story and these links

Ian Reid cleverly captures the question to be answered about BC Rail:

Why did the BC Liberals want to shut the trial down? What were they so afraid of that they would compromise the civil service, the administration of justice and maybe even the law to keep it out of the public eye?

What, in other words, were they covering up?

Another question might ask why Vancouver Sun editorialists and numerous press gallery members, particularly the long established like Palmer, Baldrey, Leslie, Leyne and Fletcher, have participated in the cover up? 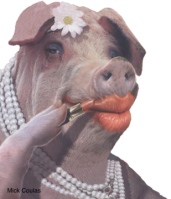 All the fussing, misdirection and obfuscation might put lipstick on this pig, but, undeniably, we are still dealing with a pig.

Blogs such as Northern Insight, The Real Story, The Gazetteer, Alex G. Tsakumis – Rebel With a Clause, Bob Mackin’s 2010 Gold Rush and others are telling the real story of BC Liberal corruption. Readership of each is running at unprecedented levels; people are seeking alternatives to old line media.

As a reader who cares about truthful reporting, spread these links far and wide. Already the too comfortable commentators of the corporate media are being forced to admit their own failures. After three years of trying to ridicule and discredit bloggers, these people are revealed as faithless servants of their own readers.