“…Willy Pickton didn’t kill up to 49 women by himself, not according to the jury who convicted him of six counts of second degree murder. The women whose remains were found at the pig farm were likely the victims of a group of sexual sadists and torturers, who likely included convicted murderer Willy Pickton himself. 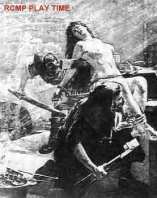 “…Was Cpl. Jim Brown one of the sexual sadists frequenting Piggy’s Palace? …Were the RCMP monitoring the gang activities, including the Angels’ visits to Piggy’s Palace? Why did the RCMP seemingly ignore a ten year string of serial murders? …How many murderers remain at large?

“All of these questions should have been answered by the just-concluded Missing Women Commission of Inquiry. We tried our best to pry the lid off and get the evidence out, but our attempts to have Cpl. Brown, Ross Caldwell, Bev Hyacinthe and David Pickton testify (among others) were rejected, as were our attempts to get access to the records of the Organized Crime Agency of BC that would reveal the nature and extent of police surveillance and gang infiltration activities involving Piggy’s Palace.

“The Missing Women Commission of Inquiry is patently incomplete. Now it has been revealed that the Coquitlam RCMP had a sexual sadist in their ranks who was sufficiently connected to the Picktons to produce a key informant, someone who tipped the police what Willy Pickton was up to three years before he was arrested. The Commission hearings must be re-opened. If it does not re-open the hearings, it will be perpetuating a police cover-up of the circumstances surrounding Canada’s worst serial killing case…”