Trust in God, but not in Enbridge

Not long ago, an animated parody by editorial cartoonist Dan Murphy offended oil transporter Enbridge. The company tried to make Murphy’s troublesome work disappear by pumping up pressure in the Postmedia boardroom.

That crude move simply ensured the cartoon enjoyed focused attention and wider distribution than if Enbridge had taken its lumps quietly or, more appropriately, answered by an act of real commitment to environmental stewardship.

Instead, Enbridge demonstrated its inept approach to public relations. That incompetence is on display again this week. American regulators issued a condemnation of the company’s actions before and after the Kalamazoo River disaster in Michigan. The Alberta company’s management was compared to the Keystone Cops.

Enbridge refused to comment on the draft report of the National Transportation Safety Board but did manage to offer a weak response that will be believed by no one:

Safety has always been core to our operations. 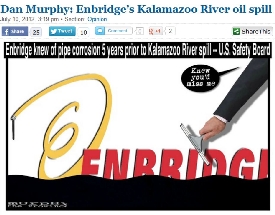 Full size version of Dan Murphy’ work at The Province.
More on Enbridge from In-Sights.

.
Since Powell River has played a large part in my life, the words and song of ten-year old Ta’Kaiya Blaney from the Sliammon First Nation have special meaning to me. Enjoy this impressive young person.

“You all have a voice, don’t be afraid to speak up about what you are passionate about. You have a gift; share it.”