Private developers behind the Narrows Inlet power project are already assured their place at the public trough. BC Hydro will buy more power they don’t need. If you are happy to see additional risk-free profits flowing to private companies using public waters, do nothing.

If you want this to end, visit the website of British Columbia’s Environmental Assessment Office and voice your objections. 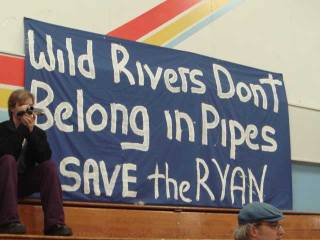 Motorcycleguy, a regular reader here, left a lengthy comment at The Vancouver Observer in response to efforts by Nigel Protter and Tzeporah Berman to defend private power producers that interfere with water systems all over the BC wilderness.

Berman is an oft criticized former environmentalist  who, in addition to working for Greenpeace International, tours as a professional speaker and greenwash consultant. Protter has been an administrator for aboriginals near Pemberton and has consulted for a Toronto-based subsidiary of Manulife Financial that wants to establish a power plant on the Ryan River, a major tributary of the Lillooet River near Pemberton. The project would divert water through a 9.5-km tunnel that will be burrowed through Sugarloaf Mountain. Protter had claimed IPP critics were providing “repetitive class warrior chants.” and unfounded observations.

I take great offence to being labelled a chanter. I absolutely stand behind my great distaste for the present group of people that make up our provincial government, regardless of the name of the party. The deceit has surfaced on all topics, not just this one. Political priorities? None before the IPP industry got me involved. Yes, this is a class war….. you just need to put a new definition on class…..it is not what you infer as bound by income levels, political parties and profession….it is one bound by those who revere our province and recognize the commons are not best protected if boardroom profits are involved….a class that does not appreciate finding out in bits and pieces what is going on.

Unfounded concerns? I challenge Mr. Protter and Ms. Berman to appear on camera at such sites as Tyson and Ramona Lakes in Narrows Inlet. I challenge them to present to the public photos during construction, views of the transmission lines linking clusters of projects together, views of the service roads. How about a view of the silt deposits flushed all the way into the ocean at Tyson Creek?…..and then you can tell us there is minimal impact. A sequence showing opening the financial statements of the parent companies would be good. These are major hydroelectric projects….you are misleading the public by not acknowledging this.

This power is for export. Conservation on any level will not be considered…..profits are the motive. You are correct that there is no one answer….but using our lakes and rivers at the scale you propose is absolutely not a step in the right direction…….if it were, you would not be hiding behind the “run of river” moniker. That is bunk.

Tell the public you are tunneling into alpine lakes like Ramona and Phantom on the Sunshine Coast….and draining them by levels of 20m….tell them you are building real dams….tell them you are diverting waterfalls….take them kayaking down the Ashlu now….tell them the truth at meetings in easily accessible venues, not the Egmont Community Hall. Show me the projects that have been disallowed. Show me one baby you have thrown out. Show me the actual amount of fossil fuel generated electricity that has been displaced….and I don’t mean displaced because of lower price on the commodities ticker….I mean displaced solely because of lack of hydroelectric supply.

You have already misled the public by saying it is for self-sufficiency and that IPP’s are small and locally owned. The whole premise of this industry has been built on deceit and lack of information being made available. The fact of the matter is…..no amount of hydroelectric power in our part of the world can offset completely the dependence on alternate sources. In the winter it doesn’t matter who owns the rivers, the water is hard and it doesn’t flow….maybe not so much for the legacy BC Hydro dams, but particularly in the vast number of watersheds developed for IPP’s.

The benefit for disrupting all watersheds in the province is just not there….the only reason is a vehicle to provide monetary benefit for owners with taxpayers paying 3 times the rate ….that is what makes them feasible for the short period they do operate. All you are doing is adding more electricity to the grid, you are not doing anything to alleviate fossil fuel use during times when the water is “hard”. You are making a lot more electricity available for resource extraction in the north….at taxpayer expense. Why not hold IPP EAO public meetings in places other than the Egmont Community Hall?

Why is it necessary to pay professional journalists to teach the IPP industry how to put a spin on things? How is carbon credit trading with subsequent tax free profits in our province going to help climate change? Show me a legally binding document, that will be recognized in world courts, that proves foreign corporations will not be able to dictate the future uses of our rivers and alpine lakes. Certainly there are a couple of good projects out there, too bad the good engineers and good locally owned enterprises hooked up with the wrong people. Once the projects get EAO approval they are flipped on the stock market to foreign corporations and investment funds. Am I wrong? Prove it.

No two ways about it we are blessed in Canada with wide-open space and nature the likes of which many Europeans have simply never seen. So I wonder in my first days back why I feel this nagging sense of loss?

I’ll tell you why……we lowly members of the general public that nag are starting to have some effect…. We may not be as eloquent or as polished in our writing skills, but we sure do know what we have at stake with our BC wilderness areas…..and we sure know when the governing party (and those who benefit monetarily from their policies) has pulled one too many sheets over our eyes.