From BigCityLib Strikes Back: 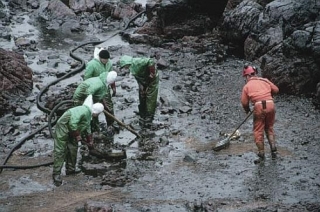 Two and a half years after the costliest oil pipeline spill in U.S. history, the company responsible for the disaster is balking at digging up oil that still remains in Michigan’s Kalamazoo River.

The cleanup has been long and difficult because the ruptured pipeline was carrying bitumen, a heavy oil from Canada’s tar sands region. Bitumen is so thick that it can’t flow through pipelines until it’s mixed with liquid chemicals to form diluted bitumen, or dilbit. When more than one million gallons of dilbit poured out of the broken pipeline in July 2010, the chemicals evaporated and the bitumen began sinking to the riverbed.

Two and a half years of bad corporate citizenship by Enbridge. They sent their lawyers around to weasel out of paying; they threw sod over-top polluted land and called it clean. And who knows how long the whole misery will go on? It took them three years to give this a quick tape-job.

The question is: why would we expect them to do a better job in the B.C. interior?