The real news gets ignored – REPLAY

I wrote the following article in 2011. It demonstrates how little has changed.

On the day George Abbott became the first Education Minister to speak at a convention of the teachers’ union since Gordon Campbell’s election in 2001, BC Liberal media focused less on the warm response from educators than on what they say is a coming confrontation.

Instead of aiming to be inflammatory, CBC offered a balanced report. The Canadian Press did as well, for example:

Abbott told the teachers he will always listen to their views, even if they do not agree on the many difficult issues facing the two sides as they prepare to sit down and hash out a new contract for the 41,000-strong federation.

“We will have lots of things that will divide us in the weeks and months ahead there is no question about that,” he said. “Labour relations alone will be an area that will be fraught with many challenges I’m sure on both sides of the table.”

Leyne wrote that after the speech, Abbott was “peppered” with observations from two people:

about how unsupported teachers are in dealing with special needs kids, sometimes violent, semiliterate, emotionally fragile, suffering from fetal alcohol syndrome problem children who populate many classes in increasing numbers.

About all he could do was nod in sympathy.

That should have provided the headline derived from Abbott’s visit. Special needs children are there today, lacking resources. Instead, we get speculation of strike or job action that can not occur until the next school year and which everyone knows will result at worst in another imposed contract if mediation and conciliation fail.

Highlighting potential job actions might seem more dramatic but they are far-off and rather meaningless. In doing so, media downplays substantive issues that should be at the forefront of discussions. Do we want our education to be effective and accessible or, ultimately, do we want to turn our schools into American style guarded camps that worry more about protecting students from gun and knife violence than preparing them to be contributing citizens.

I disclose a bias in this discussion. Among my children and their partners, we proudly number three school teachers. These young people are well educated professionals (six degrees between them) who focus their lives on improving educational experiences of children in their care. Our relatives occasionally miss family events because out-of-school duties such as preparation, marking, writing reports, doing extracurricular activities and professional development consume time that is unseen by students and parents. Teachers spend their own money for supplies, field trips, computer programs and equipment and even for necessities and rewards to needy or deserving students.

I do not know the present salary levels of these three people. I did know the entry salary my son earned when he started teaching after two degrees and a number of years working as a scientific researcher. It was an appallingly low annual salary that started with the number three. I suspect some of our MLAs receive more in expenses. These young teachers, while not talking about salaries to us, do talk about the difficulties faced from crowded classrooms and about special needs students, about poverty and drug addiction and deficient parenting skills, etc. 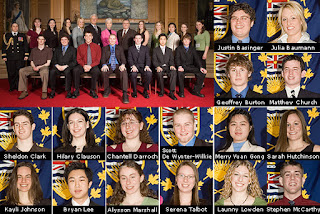 I think media focuses entirely too much on the wrong issues in today’s education. Much goes right with our schools as well. A few years ago, I had the honor of presenting scholarships to graduating high school students on behalf of the Pacific Coast Amateur Hockey Association. At awards nights of secondary schools, boys and girls of outstanding achievements are recognized, not just in academics and sports but in an amazingly broad series of community and personal activities. Those teenagers accomplished more in a few years of maturity than others do in a lifetime. All deserve the best education we can provide.

Society benefits in the long run. The richest nations also have the best systems of education. That is not coincidence; one leads to the other.