Terry Glavin: Scrutinizing Canada’s pipeline to Beijing, National Post – one of the most powerful pieces in recent memory:

Canada is at the brink of a radical shift in energy and foreign policy. But there has been no debate of any consequence about it — not in the House of Commons, not in the Senate, not in the proceedings of a Royal Commission. Certainly not in the news media... 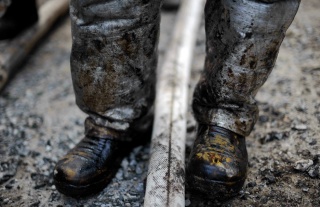 Are we going to sell the ownership of our natural resources to pay for consumer goods we can ill afford and thereby speed up the indebtedness of Canada as export revenue from those resources would be lost?” Turns out that’s exactly what we’re doing…

…And now Canadians are being expected to provide Beijing with a steady supply of bitumen in a closed loop from Beijing’s own oil sands properties in Alberta, through Beijing’s own pipeline, to oil tankers, to its own refineries back in China, so that the black comedy of “world trade” can keep unfolding the way Beijing wants. Not only that, we’re all supposed to be grateful for it.

…Well, wake up: Last year, nearly half of all the trees felled on the B.C. coast were shipped out raw. Over the past five years, raw log exports to China have gone through the roof, exploding 12-fold from 94,000 cubic metres to about 1.2 million cubic metres.

This is why more than 70 B.C. wood mills have been shuttered. Meanwhile, you’re being asked to boycott bananas because Chiquita has said unflattering things about the oil sands.

…Enbridge first announced it had obtained $100-million to fund its planning, lobbying, studies and surveys for a twinned pipeline through the Rocky Mountains and across British Columbia to saltwater at Kitimat. …but we’re not allowed to know whose money it is. Do the Conservatives even know whose money is behind the Enbridge plan? If not, why not? If so, why aren’t they telling us?

Stop and think about it for a second. After all these years, and after all the recent uproars about sinister American environmentalists, it took filings with the National Energy Board that were turned up only this month to reveal that Beijing’s very own Sinopec is accompanied by Suncor, Cenovus, Nexen and MEG among the Enbridge project’s big-money backers. That still leaves at least $40-million in boost-and-plan cash that’s coming from an unknown source.

[Natural Resources Minister Joe Oliver made] certain intemperate remarks about radical foreign “billionaire socialists,” by which he did not mean the unelected billionaires who run the Chinese People’s Congress in Beijing, but rather American matinee idols who enjoy heli-skiing vacations in the Kootenay Mountains.

The servility of Canada’s political leaders (municipal, provincial and federal) to the obvious manipulations of Chinese strategists who flaunt world trade and financial market principles and jail democracy-promoting authors for 10-year terms is a national disgrace.” I’ll say. It wasn’t some dweebish umbrage-taker from the Kitsilano Civil Liberties Union who wrote those words. It was Tony Campbell, the former head of the Intelligence Assessment Secretariat for the Privy Council Office.

Remember the Richard Fadden controversy? Seems like only yesterday that everybody was screaming at the head of the Canadian Security Intelligence Service, demanding that he shut up. Fadden almost lost his job. Why? Among other revelations, Fadden reported that cabinet ministers in two provinces were under the control of a certain foreign government that Fadden thought it too indelicate to name, but he did go on to say that Chinese diplomatic missions are funding and organizing political activism in Canada.

And I haven’t even got my boots on yet.

Read the entire article by Terry Glavin at the National Post.