No one said fares are fair

Tickets for once a week travel on the 57-year-old 49-car ferry North Island Princess, between Powell River and Texada Island, for a car, driver and passenger, cost $1,634.49 a year, including frequent use discounts and current fuel rebate. There is no land-based alternative for the 35 minute, 5.1 mile crossing.

Tickets for once a week travel on the 6-year-old 80-car ferry Osprey, between Kootenay Bay and Balfour, for a car, driver and passenger, cost zero. The land-based alternative to the 35-minute, 5.5 mile crossing means a drive to Creston is 90 km longer.

For no apparent reason, provincial tax revenues pay 100% of operating costs of ferries that sail on fresh water and 20% of operating costs of ferries sailing on salt water. I’m not aware of any traffic counts published by the private operators of interior ferries but government has claimed the cost of serving inland crossings is around $20 million a year. In 2012, Vancouver Sun’s Pete McMartin reported it as $10 million. However, the actual expenditures of government for inland ferries is substantially higher. Public accounts for fiscal years 2013 and 2014 show the two main operators were paid over $72 million.

Here is a summary of charges faced by users of ferries on a handful of coastal and interior routes.

A comment left by Lew on an earlier article deserves to be featured.

Here is Christy Clark, the premier of our province, speaking as a radio show host just before leaving to run for leadership of the BC Liberals:

“Ferry fares go up on Friday. It will be the eighth fare hike over the past five years, and this time BC Ferries says it needs to do it to find the money for rising fuel costs, and since the provincial government refuses to chip in, they’re dumping almost all of those new costs on users.

The impact of the new fare increases? Well, according to BC Ferries latest annual report, these unprecedented fares, as they say, could result in a decline in ferry traffic, and that’s a quote. No kidding! And I’m guessing that the fares have finally gotten so high that for every dollar they raise it will actually garner less in revenue. Higher fares mean fewer passengers, so the accountants will have to subtract paying customers from every new dollar they add to ticket prices, and at this rate how long will it be before they abandon the routes where they don’t make any money? How long before the provincial government abandons their responsibility to provide a public service to many of the people who depend on the ferries to travel and ship their goods?

Our transportation minister seems to have an insatiable appetite for funding highways if they require blacktop, and he seems perfectly at peace with providing free ferries on inland lakes in BC, but he doesn’t seem to have the same affection for our maritime highway on the coast.”

Contrast her comments then with what her transportation minister is now telling the UBCM in the face of their report demonstrating that what radio host Clark said was valid and quite prescient.

“Our government has no plans to roll back any service adjustments that were made,” said Stone. “We have no plans to interfere in the independent process respecting rates, certainly for the rate increase that the B.C. ferry commissioner has set for next year.”

All that I wish to add is an audio clip of Clark’s remarks. It is from Mike Eckford’s show on CKNW, September 24.

ADDENDUM:
A year and a half ago, after Liberals asked Vaughn Palmer to explain why inland and coastal ferries were not comparable, this is the Sun newspaper photograph used as an example of an inland ferry: 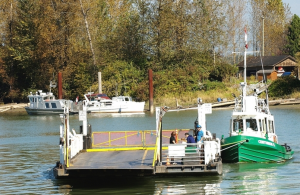