By Norm Farrell on January 25, 2016 • ( 14 Comments )
There is too little public discussion of huge costs and questionable benefits of an industry that employs a tiny fraction of BC’s workers (0.4% in 2014 according to BC Stats).

With land developers, largest funders of the BC Liberal Party are natural resource companies. They’ve contributed millions of dollars to encourage government sympathetic to their needs. No administration in the province’s history has been as sympathetic to natural gas producers as the present one and benefits to the industry measure in the billions.

I offer information about payments made by natural gas producers to the province over the last ten years. The report is drawn from provincial documents and the numbers can be confirmed by anyone with diligence. These show only the natural resource revenue side, without affect of government accounting that spreads certain rights payments over time. That policy has a smoothing effect so that, in the current fiscal year, the province’s statement of operations will not directly reflect recent weakness in both royalties and sale of petroleum and natural gas rights.

Additionally, government is now spending unprecedented sums to promote the industry. In fiscal year 2016, despite the absence of associated revenues, the Natural Gas Development Ministry budget was up 11% to $444 million. In addition, BC Hydro is spending billions to deliver subsidized power to producers and fresh water is poisoned in stunning quantities for fracking.

Gas and other natural resource revenues are influenced by a number of factors. The pricing principles applied have more to do with profitability of resource companies than the intrinsic value of public goods produced by private enterprises. (Ask your landlord to use that principle for calculating your dwelling rent.)

I’d like readers to concentrate on the revenue changes since Gordon Campbell departed. There is a connection waiting to be revealed. 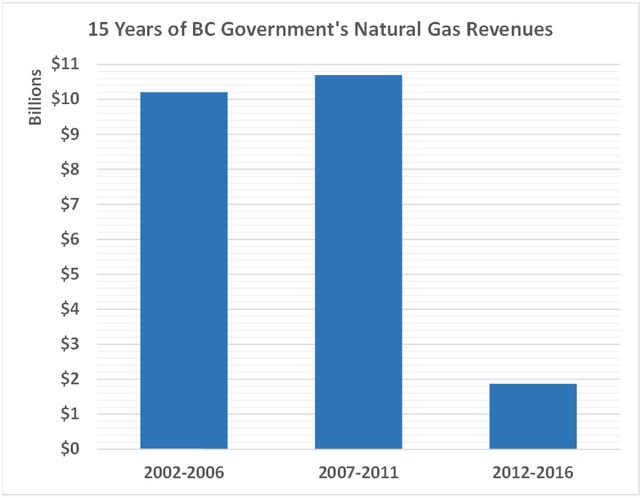 BC Revenues from Gas Royalties and Rights by Year

Grabbing from middle class pockets while delivering huge sums to privileged pals. (Ferry deal is only one.) #bcpoli https://t.co/qmANAPrKMk