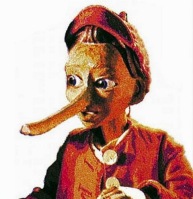 Once again, the British Columbia Liberals demonstrate practiced mendacity. They are consistent though since mega-projects of the past five years typically doubled between first announcement and completion but were invariably pronounced to be on-time and on-budget. The mantra will be used again for the Peace River project, and it will be echoed by the compliant proMedia, even if the dam costs $18 billion. Overages will be accepted,

Based on a sample of 258 transportation infrastructure projects worth US$90 billion …it is found with overwhelming statistical significance that the cost estimates used to decide whether such projects should be built are highly and systematically misleading. Underestimation cannot be explained by error and is best explained by strategic misrepresentation, that is, lying. The policy implications are clear: legislators, administrators, investors, media representatives, and members of the public who value honest numbers should not trust cost estimates and cost-benefit analyses produced by project promoters and their analysts.

The Sierra Club believes that latter point is significant,

British Columbians will be shelling out up-front, B.C. will be losing big time on the jobs front. Building geothermal plants to the same capacity would employ almost 1,900 people – compared to only 165 for Site C. And this doesn’t even take into account development of the agricultural sector in the valley.

According to The Common Sense Canadian,

The retired head of the Association of Major Power Users of BC, Dan Potts, estimates the proposed Site C Dam would lose $350 million a year for taxpayers and BC Hydro ratepayers. The 30-year pulp mill manager told media in Vancouver yesterday that the project, estimated to cost $8 Billion or more, is “fundamentally uneconomic” – based on its outmoded technology and power trading prices that are likely to remain far lower than the cost of electricity produced by Site C.

Prof. Bent Flyvbjerg was co-author of an article in the Harvard Business Review about the runaway cost of a project at a large American clothing company,

A $5 million project that leads to an almost $200 million loss is a classic “black swan.” The term was coined by our colleague Nassim Nicholas Taleb to describe high-impact events that are rare and unpredictable but in retrospect seem not so improbable. Indeed, what happened at Levi Strauss occurs all too often, and on a much larger scale…

Read this article Lies my energy minister told me from December 12.