The following was first published in 2013 and has been updated.

However, innovators in Norway have moved beyond. Sustainability expert Bjørn K. Haugland believes that within a few years, most Norwegian ferries will be battery-powered.

Siemens, a multinational engineering and electronics giant, provides detail about a new vessel that is only a little smaller than those coming from Poland in BC Ferries’ $252 million purchase.

Together with the Norwegian shipyard Fjellstrand, Siemens has developed the world’s first electrically powered car ferry. The 80-meter vessel can carry 120 cars and 360 passengers. The vessel currently serving the route uses approx one million liters of diesel a year and emits 2680 metric tons of carbon dioxide and 37 metric tons of nitrogen oxides.

The ferry has been specially designed to accommodate the requirements of an electric drive system. As a catamaran with two slim hulls, it offers less resistance in the water than a conventional vessel. Furthermore, the hulls are made of aluminum instead of steel, which is conventionally used. Rather than a diesel engine, the ferry is equipped with electric motors to drive the ship’s two screws. The new vessel weighs only half as much as a ferry of conventional design.

The crucial feature of the new ferry is that it only takes 10 minutes to recharge the batteries. Hundreds of ferries link Norway’s mainland to the islands off its coast and provide routes across its many fjords. Using today’s battery and recharging technology, all crossings of up to 30 minutes in duration could be served by electrically powered vessels.re

With 20 directors on two boards and two well compensated ferry commissioners overseeing the highest priced ferry managers in the world, BC Ferries should be world leaders in innovation.

Norwegian ferry operator Fjord1 has many LNG ferries in service or on order, with the largest equipped to carry more than 250 vehicles. Now, they’re putting into service five new hybrid ferries that will operate on LNG and battery power.

Multi Maritime is a Norwegian company that has designed more than 30 high-efficiency ferries including hybrids and pure electrics.

Norway has a population about 10% larger than British Columbia. It appears the Norwegian ability to innovate is substantially higher than that of Canadians. From the article A new fleet of all-electric ferries with massive battery packs is going into production:

The Havyard shipyard announced that it received a contract to build seven battery-powered ferries for Fjord1, Norwegian transport conglomerate.

The news comes after the operators of the first all-electric ferry in Norway, the ‘Ampere’, reported some impressive statistics after operating the ship for over 2 years.

They claim that the all-electric ferry cuts emissions by 95% and costs by 80%.

Unsurprisingly, the potential cost savings are attracting a lot of orders for new electric ferries and for the conversion of existing diesel-powered ferries…

I think you shall add to your article linked below that the batteries used in the vessels mentioned in the article by Siemens are developed and made in Richmond, BC by Corvus Energy.

This is a press release by the company:

Richmond, British Columbia, Canada – May 22, 2018 – Corvus Energy is pleased to announce that the company has been selected by Norwegian Electric System (NES) to supply lithium ion battery-based energy storage systems (ESS) for two new all-electric ferries being built by Havyard for Norwegian ferry operator Fjord1. The ferries will operate on the Magerholm-Sykkylven route. This follows a previous order in November 2017 to supply the ESSs for three similar newbuilt Fjord1 ferries that will operate on the Hareid-Sulesund route.

Each of the five all-electric ferries, which are 111 meters in length and holds 120 cars, will be equipped with a 2.9 MWh Corvus Orca Energy ESS that will supply electrical power to the ferry’s NES all-electric power and propulsion systems. The ferries are expected to be delivered in 2019.

“Fjord1 continues to forge a very progressive path towards environmentally sustainable operations with these additional all-electric ferries,” says Stein Ruben Larsen, Vice President Sales at NES, a total system integrator of electric systems for the global marine market. With respect to their ESS selection, he remarks, “The proven reliability, safety and performance of the air-cooled Orca ESS was important in awarding this contract to Corvus Energy.”

“Corvus Energy is honoured to once again be selected to provide Orca Energy Storage Systems for Fjord1 ferries,” says Roger Rosvold, Director of Sales & Key Account at Corvus Energy. “NES are skilled and experienced electrical system integrators, and our close partnership with them in designing and delivering these innovative solutions is key to accelerating the adoption of energy storage systems.”

As the leading manufacturer of energy storage systems for maritime applications, Corvus Energy provides battery power to more hybrid or all-electric ferries than all other providers of energy storage systems combined. Corvus offers the innovative Orca ESS solutions portfolio and has unsurpassed experience from 140+ projects, totaling over 100 MWh and 1.5 million operating hours. 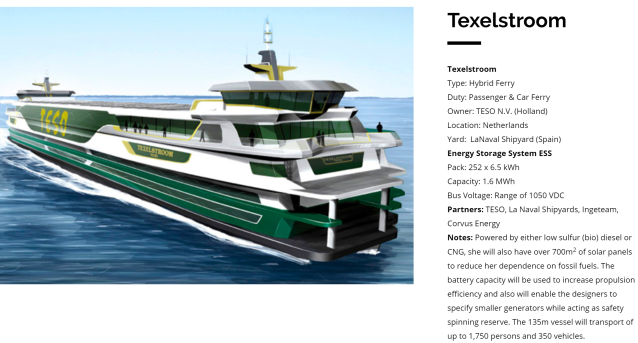 The design for the conversion process, which will rely on research from Scandinavian countries, is set to begin this summer.

“We’re going to learn from their experiences and bring that technology to Washington state,” [ Secretary of Transportation Roger] Millar said.