Canada’s plan: do the opposite of what is promised

Delegates from 195 countries met in Paris for the 2015 United Nations Climate Change Conference. Prime Minister Justin Trudeau had a plan to address climate change and “take on a new leadership role internationally.”

Trudeau added, “There can be no laggards in this.”

In the Paris accord, Canada committed to cut emissions at least 30% below 2005 levels by 2030. It was not the first time this country had made an empty promises.

In March 2018, Auditors General from across Canada issued a climate change report that included :

Canada has missed two separate emission reduction targets (the 1992 Rio target and the 2005 Kyoto target) and is likely to miss the 2020 Copenhagen target as well. In fact, emissions in 2020 are expected to be nearly 20 percent above the target…

Despite promises to reduce emissions and move to a zero-carbon economy, Canada’s federal government has recently committed billions of dollars to ensure the opposite result.

Bail out for Trans Mountain $15 – $20 b. $4.5b for old assets, over $9b for expansion, $3.6b financial assurances for land and marine spills. Kinder Morgan’s no-lose bet makes Ottawa go all in and Canadians pay https://t.co/z83kg8eCez

Additionally, Canada has promised to exempt projects mining tar sands – what Bloomberg News called one of the world’s dirtiest oil sources – from federal review and agrees that new bitumen mining developments would be seen as consistent with its plan for meeting climate-change targets.

The National Energy Board, overseer of international and inter-provincial aspects of Canada’s oil and gas industry, has another view of this country’s plan for a zero-carbon economy. It forecasts that Alberta’s tar sands production will triple in three decades leading to 2040. This chart is from the NEB: 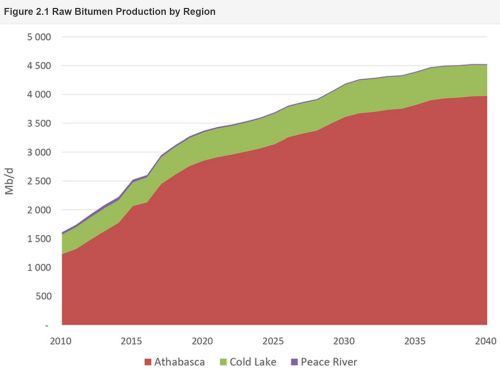 Under the governments of both Christy Clark and John Horgan, British Columbia has demonstrated the same commitment to addressing climate change as Rachel Notley and Justin Trudeau. The BC NDP position was made clear when Premier Horgan offered to provide billions of dollars worth of tax breaks to liquefied natural gas producers.

Also, BC is determined to allow producers to extract natural gas without payment of royalties. Writing in the Vancouver Sun, Ben Parfitt provided information that could have been taken from the pages of In-Sights:

And the subsidy train has only just pulled out of the station.

In a startling disclosure last November, B.C. Energy Minister Michelle Mungall said the current value of outstanding credits is $3.2 billion – a whopping $1.1 billion more than the previous year. That eyebrow-raising jump in the credit account is two times greater than the previous record for an annual increase. Yet when asked to elaborate on the unprecedented increase, Mungall’s communication’s director, David Haslam, declined to provide any concrete explanation.

That $3.2 billion and growing pile of credits represents money that you and I will never see…